Cars Avoid Crashes By Talking To Each Other

The vehicles will be equipped to continuously communicate over wireless networks, exchanging information on location, direction and speed 10 times a second. 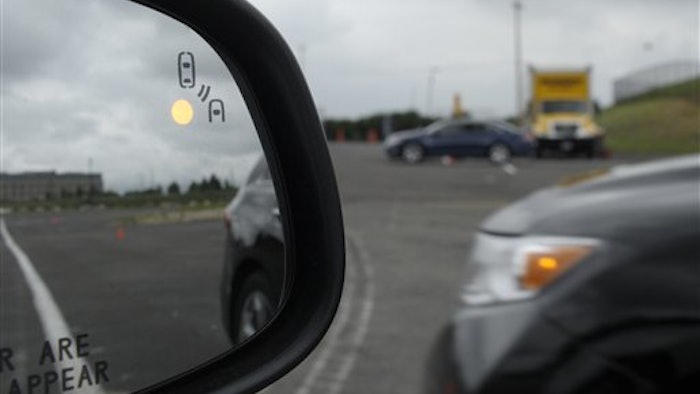 WASHINGTON (AP) -- The future of automotive safety is coming this summer to the U.S.: Cars that to talk to each other and warn drivers of impending collisions.

The vehicles will be equipped to continuously communicate over wireless networks, exchanging information on location, direction and speed 10 times a second with other similarly equipped cars within about 1,000 feet (300 meters). A computer analyzes the information and issues danger warnings to drivers, often before they can see the other vehicle.

Called vehicle-to-vehicle communication, or V2V, more advanced versions of the systems can take control of a car to prevent an accident by applying brakes when the driver reacts too slowly to a warning.

V2V "is our next evolutionary step ... to make sure the crash never happens in the first place, which is, frankly, the best safety scenario we can all hope for," said David Strickland, administrator of the National Highway Traffic Safety Administration.

V2V technology holds the potential to help in most crashes that aren't alcohol or drug related, Strickland said. But a lot will depend on how drivers respond to the warnings, and that's one reason for the Ann Arbor test. Overall, more than 32,000 people were killed in traffic accidents in the United States last year.

In addition to warning of cars running red lights or stop signs, "connected cars" can let drivers know if they don't have time to make a left turn because of oncoming traffic. When driving on a two-lane road, the systems warn when passing is unsafe because of oncoming cars -- even vehicles around a curve that the driver can't see yet.

In a line of heavy traffic, the systems issue an alert if a car several vehicles ahead brakes hard even before the vehicle directly in front brakes. And the systems alert drivers when they're at risk of rear-ending a slower-moving car.

In this photo taken, Tuesday, May 22, 2012, professional test driver J.D. Ellis of Cincinnati, Ohio, demonstrates the side mirror warning signal in a Ford Taurus at an automobile testing area in Oxon Hill, Md. (AP Photo/Susan Walsh)

It's also possible for connected cars to exchange information with traffic lights, signs and roadways if states and communities decide to equip their transportation infrastructure with similar technology. The information would be relayed to traffic management centers, tipping them off to congestion, accidents or obstructions. If cars are reported to be swerving in one spot on a roadway, for example, that could indicate a large pothole or obstruction. The constant stream of vehicle-to-infrastructure, or V2I, information could give traffic managers a better picture of traffic flows than they have today, enabling better timing of traffic signals to keep cars moving, for example. Correspondingly, cars could receive warnings on traffic tie-ups ahead and rerouting directions.

NHTSA has been working on the technology for the past decade along with eight automakers: Ford, General Motors, Honda, Hyundai-Kia, Mercedes-Benz, Nissan, Toyota and Volkswagen.

"We think this is really the future of transportation safety, and it's going to make a huge difference in the way we live our lives," said Scott Belcher, president of the Intelligent Transportation Society of America, which promotes technology solutions to transportation problems.

The technology is already available, said Rob Strassburger, vice president for safety of the Alliance of Automobile Manufacturers. He said what's needed is for the government to set standards so that all automakers use compatible technology.

Some of the safety technologies for V2V are already available in cars, although they tend to be offered primarily on higher-end models.

Together, the currently available technologies and the future V2V systems may effectively form a kind of autopilot for the road. Said Strassburger: "The long-term trajectory for these technologies is the vehicle that drives itself -- the driverless car."