Group Aims To Build Car For The Blind

WASHINGTON (AP) -- Could a blind person drive a car? Researchers are trying to make that far-flung notion a reality.

The National Federation of the Blind and Virginia Tech plan to demonstrate a prototype vehicle next year equipped with technology that helps a blind person drive a car independently.

The technology, called "nonvisual interfaces," uses sensors to let a blind driver maneuver a car based on information transmitted to him about his surroundings: whether another car or object is nearby, in front of him or in a neighboring lane.

Advocates for the blind consider it a "moon shot," a goal similar to President John F. Kennedy's pledge to land a man on the moon. For many blind people, driving a car long has been considered impossible. But researchers hope the project could revolutionize mobility and challenge long-held assumptions about limitations.

"We're exploring areas that have previously been regarded as unexplorable," said Dr. Marc Maurer, president of the National Federation of the Blind. "We're moving away from the theory that blindness ends the capacity of human beings to make contributions to society."

The Baltimore-based organization was announcing its plans for the vehicle demonstration at a news conference Friday in Daytona Beach, Fla.

Maurer first talked about building an automobile that the blind could drive about a decade ago when he launched the organization's research institute.

"Some people thought I was crazy and they thought, 'Why do you want us to raise money for something that can't be done?' Others thought it was a great idea," Maurer said. "Some people were incredulous. Others thought the idea was incredible."

The vehicle has its roots in Virginia Tech's 2007 entry into the DARPA Grand Challenge, a competition for driverless vehicles funded by the Defense Department's research arm. The university's team won third place for a self-driving vehicle that used sensors to perceive traffic, avoid crashing into other cars and objects and run like any other vehicle.

Following their success, Virginia Tech's team responded to a challenge from the National Federation of the Blind to help build a car that could be driven by a blind person. Virginia Tech first created a dune buggy as part of a feasibility study that used sensor lasers and cameras to act as the eyes of the vehicle. A vibrating vest was used to direct the driver to speed up, slow down or make turns.

The blind organization was impressed by the results and urged the researchers to keep pushing. The results will be demonstrated next January on a modified Ford Escape sport utility vehicle at the Daytona International Speedway before the Rolex 24 race.

The latest vehicle will use nonvisual interfaces to help a blind driver operate the car. One interface, called DriveGrip, uses gloves with vibrating motors on areas that cover the knuckles. The vibrations signal to the driver when and where to turn.

Another interface, called AirPix, is a tablet about half the size of a sheet of paper with multiple air holes, almost like those found on an air hockey game. Compressed air coming out of the device helps inform the driver of his or her surroundings, essentially creating a map of the objects around a vehicle. It would show whether there's another vehicle in a nearby lane or an obstruction in the road.

A blind person, who has not yet been chosen, will drive the vehicle on a course near the famed Daytona race track and attempt to simulate a typical driving experience.

Dr. Dennis Hong, a mechanical engineering professor at Virginia Tech who leads the research, said the technology could someday help a blind driver operate a vehicle but could also be used on conventional vehicles to make them safer or on other applications.

Advocates for the blind say it will take time before society accepts the potential of blind drivers and that the safety of the technology will need to be proven through years of testing. But more than anything, they say it's part of a broader mission to change the way people perceive the blind.

Mark Riccobono, executive director of the NFB's Jernigan Institute, said when he walks down the street with his 3-year-old son, many people might think he, as a blind person, is being guided by his son.

"The idea that a 3-year-old takes care of me stems from what they think about blindness," Riccobono said. "That will change when people see that we can do something that they thought was impossible." 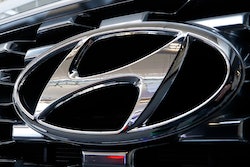