In July, Republican Gov. Mike Parson signed a bill providing up to $50 million of tax credits if GM invests $750 million to expand the Wentzville plant. 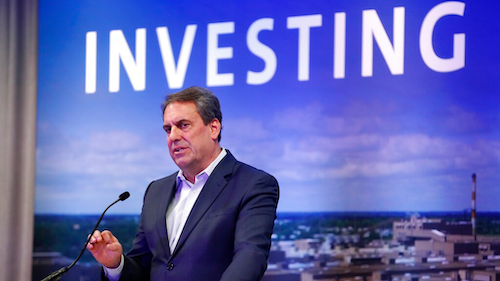 General Motors President Mark Reuss speaks Friday, Dec. 13, 2019, at the General Motors Wentzville Assembly and Stamping plant in Wentzville, Mo. Reuss announced the plant will receive $1 billion to upgrade the facility as it prepares to produce a next generation of midsize pickup trucks.
AP Photo/Jeff Roberson

WENTZVILLE, Mo. (AP) — General Motors will invest $1.5 billion to make what it calls the “next generation” of mid-sized pickup trucks at its plant near St. Louis, the company’s president said Friday.

GM will use the money to upgrade its Wentzville Assembly and Stamping Plant in preparation for the new products, GM President Mark Reuss said at a news conference inside the plant, about 40 miles (65 kilometers) west of St. Louis. The company already produces the Chevrolet Colorado and GMC Canyon pickups there.

Reuss said the investment is expected to help retain 4,000 jobs at the plant. The company has about 4,300 total workers in Wentzville and any job losses will come through attrition, said Glen Kage, president of United Auto Workers Local 2250, which represents the workers.

A GM spokeswoman confirmed that no jobs will be cut.

GM will invest about $1 billion to upgrade the plant itself. The rest of its investment is expected to be used for things such as machinery for outside companies that supply parts to the plant.

The company did not release specific information about the new generation of mid-sized pickups, a product line in which GM has dominated in recent years.

“Suffice to say they will be very worthy replacements for the generation of trucks that rejuvenated and redefined the mid-sized segment," Reuss said.

The investment in Wentzville is part of GM's comprehensive strategy to invest in growth areas and strengthen its U.S. manufacturing base, Reuss said. The expansion comes as GM plans to permanently close factories in Ohio and Maryland.

The announcement comes less than two months after GM workers nationwide ended a contentious 40-day strike with an agreement that included a commitment by GM to invest $1.5 billion in Wentzville. The plant also makes Chevrolet Express Cargo and GMC Savana full-size vans.

Missouri leaders have pushed hard to entice GM to expand. In July, Republican Gov. Mike Parson signed a bill providing up to $50 million of tax credits if GM invests $750 million to expand the Wentzville plant.

Some lawmakers, both Democrats and Republicans, were critical of the incentive package, saying it failed to guarantee that all GM workers in Wentzville will keep their jobs. Some wanted to require GM to meet staffing thresholds to get the incentives.

But Reuss' announcement would keep most of the current employees. GM said it has about 4,000 hourly workers and 330 salaried workers in Wentzville, making it one of the region's largest employers. And including suppliers, the Wentzville plant is responsible for more than 12,000 jobs, Parson said.

“The General Motors plant in Wentzville has a major impact on our economy,” Parson said.

Republican Sen. Roy Blunt said the investment is the biggest-ever private sector investment in Missouri. Kage, the UAW Local president, said the impact goes far beyond the plant itself.

“We know this investment will bring other parts suppliers and other manufacturing to the Wentzville area," Kage said.

GM said it has sold more than 700,000 mid-size pickups in the U.S. since reintroducing the Colorado and Canyon in 2013. GM said that during that span, it has sold 600,000 more pickups overall than any other competitor in the U.S.

The company said it has invested in mid-sized pickups in recent years by bringing more product features to the market, including special edition models like the Colorado ZR2 and Bison, and the Canyon AT4, which will be available in 2020.

The Wentzville plant opened in 1983 and operates three shifts.

Installation of Robots Slumped in 2019

They're outfitted with 15 cameras and simply roam the aisles looking for empty shelves.
Jan 16th, 2020

But the vagueness of the principles announced by the White House is unlikely to satisfy AI watchdogs.
Matt O'Brien
Jan 8th, 2020

Wristband Says No to Junk Food

A London startup believes it can help you make healthier diet choices at the grocery store — using your own DNA.
Rachel Lerman
Joseph Pisani
Jan 8th, 2020