Boeing said orders for 88 of its Max jets were canceled in November. 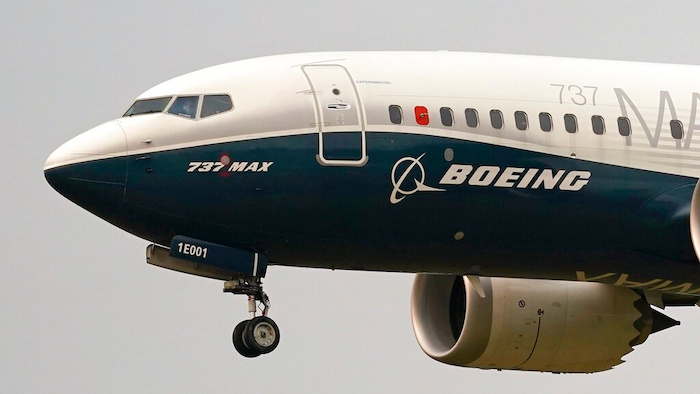 In this Sept. 30, 202, file photo, a Boeing 737 Max jet, piloted by Federal Aviation Administration (FAA) chief Steve Dickson, prepares to land at Boeing Field following a test flight in Seattle. Boeing Co. reported more cancellations for its 737 Max jet, which this week is scheduled to carry paying passengers for the first time since the planes were grounded 21 months ago after two deadly crashes. The company said Tuesday, Dec. 8, 2020, that orders for 88 of the planes were canceled in November.
AP Photo/Elaine Thompson, File

Boeing Co. reported more cancellations for its 737 Max jet, which this week is scheduled to carry paying passengers for the first time since the planes were grounded 21 months ago after two deadly crashes.

Boeing said orders for 88 of the planes were canceled in November, pushing the total to 536 for the year.

The company reported 27 orders for the plane, although 25 were a new order by Virgin Australia that replaced an earlier, larger order for 48 Max jets that was scrubbed, accounting for a majority of the month's cancellations. The November figures don't include Irish carrier Ryanair's announcement last week that it will order 75 more Max jets.

Boeing said it delivered seven commercial jets during November, mostly cargo planes to UPS, FedEx, DHL and others, bringing total deliveries in 2020 to 118. European rival Airbus delivered 64 planes in November and 477 for the year.

An analyst for financial-services firm Cowen, Cai von Rumohr, called Boeing's latest report on orders and deliveries “weak on both sides of the ball.”

Shares of Chicago-based Boeing were down less than 1% in afternoon trading. They closed Monday down 27% for the year to date, but they have been rising since early November on expectation that the Federal Aviation Administration would let the Max fly again. The FAA issued an ungrounding order on Nov. 18 that laid out required steps for airlines to resume using the plane, which was grounded in March 2019 after two crashes that killed 346 people.

On Wednesday, Brazilian airline Gol plans to operate the first flight on a Max with paying passengers since the grounding. American Airlines plans the first U.S. flight on Dec. 29.

Boeing built about 450 Max jets during the grounding but was unable to deliver them to airlines — an important hitch because Boeing gets much of its cash from sales at delivery. The company planned to hand over the first of those undelivered planes to United Airlines on Tuesday in Seattle. United plans to fly the jet to Houston later this week and use it to carry passengers starting early next year.

On Monday, UBS raised its rating on the shares to “Buy,” saying that the availability of a vaccine for COVID-19 will help air travel — and demand for airliners — grow faster than expected.