Prosecutors allege that the missile that downed the jet was trucked into Ukraine from a Russian military base. 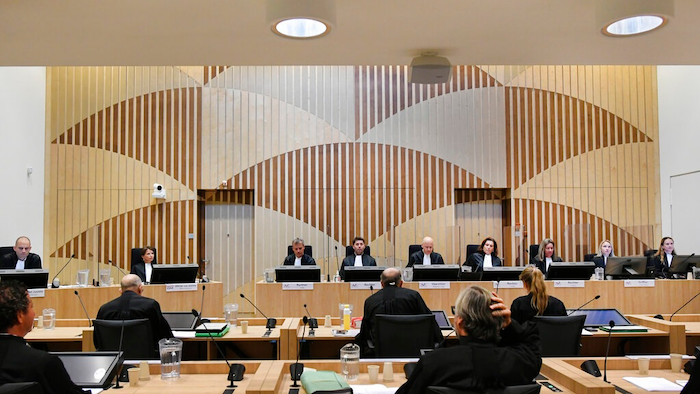 Presiding judge Hendrik Steenhuis, rear fifth from right, opens the court session as the trial resumed for three Russians and a Ukrainian charged with crimes including murder for their alleged roles in the shooting down of Malaysia Airlines Flight MH17 over eastern Ukraine in 2014, at the high security court building at Schiphol Airport, near Amsterdam, Monday, August 31, 2020. Judges and lawyers representing relatives of the 298 people killed are expected to discuss the issue of compensation.
Piroschka van de Wouw/Pool photo via AP

SCHIPHOL, Netherlands (AP) — A lawyer for relatives of victims killed when Malaysia Airlines Flight 17 was shot down over eastern Ukraine in 2014 told trial judges Monday that the families want damages as a recognition of the injustice they suffered and told judges that Russian “disinformation” compounds their grief.

Lawyer Arlette Schijns was speaking at the resumption of the Dutch trial in absentia of three Russians and a Ukrainian charged with offenses including mass murder for their alleged involvement in the downing of MH17.

All 298 passengers and crew on board the Boeing 777 flying from Amsterdam to Kuala Lumpur were killed when the plane was blown out of the sky on July 17, 2014, by a Buk missile fired from territory controlled by pro-Russia rebels.

Schijns, who is representing 450 relatives, urged the court not to lose sight of the suffering of the hundreds of people who lost their loved ones as she addressed the judges on legal questions linked to families' right to claim damages.

“This is about individuals who were confronted six years ago with a terrible loss that continues to have an influence on their lives today,” she said.

Some families watched Schijns speak from a public gallery in the court on the edge of the airport from where the doomed flight took off.

“The criminal trial is important for them because it will establish the facts of what happened on July 17, 2014. Who is responsible for it? What sentence they deserve," she said. "In other words, it’s about justice, fairness, crime and punishment.”

“It’s not about the money, it’s about the truth. That’s what we want,” he said outside court.

Prosecutors allege that the missile that downed flight MH17 was trucked into Ukraine from a Russian military base. Russia has repeatedly denied involvement.

Schijns said that “obstruction and disinformation” by Russian authorities is compounding the suffering of relatives of the dead.

“We’re talking here about people of flesh and blood. In addition to the grief they face because of the loss of their dearest, they are additionally injured by Russia’s attitude,” she told judges.

After a years-long international investigation, prosecutors last year named four suspects: Russians Igor Girkin, Sergey Dubinskiy and Oleg Pulatov as well as Ukrainian Leonid Kharchenko. None of them has appeared for the trial, which started in March and is still at a preliminary stage. Only Pulatov is represented at the trial by lawyers.

It is not yet clear how many families will submit compensation requests at the trial, which is expected to run deep into 2021, or how much they will claim.

Schijns said the Dutch court needs to establish that they have a right under Ukrainian law to claim damage payments and said that the amount should do justice to their loss.

"If we want compensation to be reasonable and a genuine symbol of the defendants shouldering responsibility for their own actions, then the compensation must reflect the seriousness and the importance of this crime and these consequences for the relatives,” she said.