Astronaut launches will begin from the U.S. after nine years of complete Russian dependence. 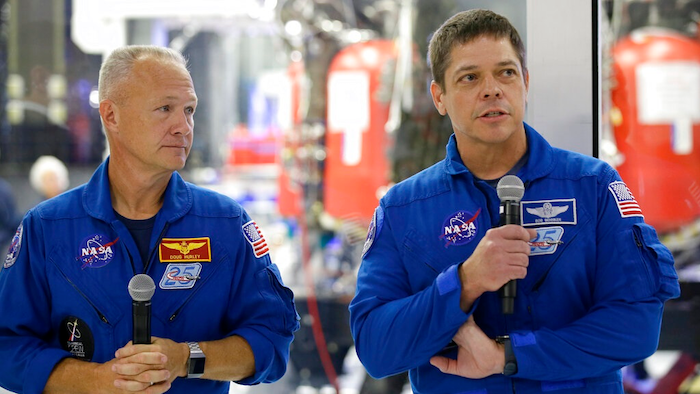 In this Thursday, Oct. 10, 2019 file photo, NASA astronauts Bob Behnken, right, and Doug Hurley talk to the media in front of the Crew Dragon spacecraft at SpaceX headquarters in Hawthorne, Calif. On Friday, April 17, 2020, NASA and SpaceX announced May 27 for resuming human launches from the U.S. after nearly a decade. Hurley and Behnken will blast off atop a SpaceX Falcon 9 rocket, departing from the same Kennedy Space Center launch pad used by Atlantis in July 2011.
AP Photo/Alex Gallardo

CAPE CANAVERAL, Fla. (AP) — NASA and SpaceX have picked May 27 for resuming astronaut launches from the U.S. after nine years of complete Russian dependence.

“On May 27, @NASA will once again launch American astronauts on American rockets from American soil!” Bridenstine tweeted.

Astronauts Doug Hurley and Bob Behnken will blast off atop a SpaceX Falcon 9 rocket, departing from the same Kennedy Space Center launch pad used by shuttle Atlantis in July 2011, as well as the Apollo moonshots a half-century ago. Hurley served as pilot on that last shuttle mission and will be the spacecraft commander for SpaceX's Dragon crew capsule.

Launch day will be a Wednesday, with a liftoff time of 4:32 p.m. EDT. It's too soon to know whether the coronavirus pandemic will prompt crowd restrictions.

Only three countries have launched people into orbit since 1961: Russia, the U.S. and China, in that order. SpaceX would be the first company.

SpaceX successfully conducted its first test flight of a Dragon crew capsule a year ago, sending the capsule — minus a crew — to the space station. The returned capsule was accidentally destroyed during ground testing at Cape Canaveral, further delaying the astronaut launch.

With the space station crew now down to three, Hurley and Behnken will spend weeks, perhaps months, helping to maintain the orbiting lab. The length of their mission is still under review, according to NASA.

NASA, meanwhile, is in the process of buying another seat on a Russian rocket. Russian Soyuz capsules have been the sole means of crew transportation to and from the space station since 2011.

SpaceX has been using Falcon 9 rockets to launch cargo to the space station in the company’s original Dragon capsules since 2012. NASA turned to private companies for deliveries once the shuttle program ended.

Boeing also is working to launch astronauts under NASA's commercial crew program, but the company's effort suffered a serious setback following last December's botched test flight. Launching without anyone on board, Boeing's Starliner capsule failed to reach the space station after ending up in the wrong orbit and came close to destruction twice because of software errors.

Boeing plans to repeat the test flight, again without astronauts, this fall.