It’s a dramatic change of fortune for the industry, which finished 2019 with strong passenger demand. 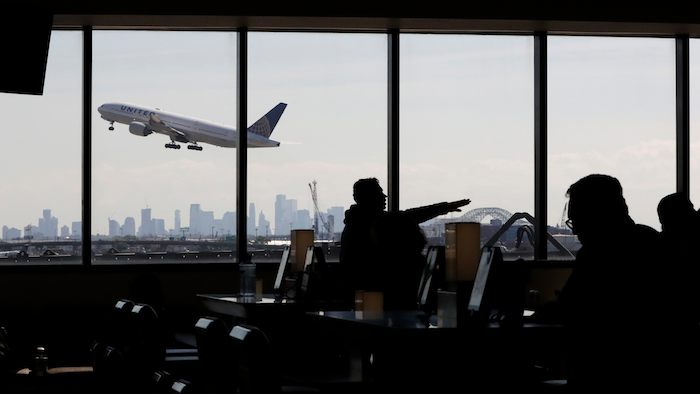 In this July 18, 2018, file photo, a United Airlines commercial jet takes off as travelers sit at a gate in Terminal C of Newark Liberty International Airport in Newark, N.J.
Associated Press

NEW YORK (AP) — Airlines are stuck in a severe patch of turbulence as the virus outbreak causes passengers to cut back on travel, clouding the industry's growth prospects.

All big U.S. airlines have warned investors that their finances will take a hit, and many are cancelling flights because of slumping demand. It’s a dramatic change of fortune for the industry, which finished 2019 with strong passenger demand.

As governments across the globe implement quarantines and other strict measures to contain the virus, the outlook for the travel industry is darkening. Amazon, Apple and other companies are telling staff to skip business trips, an especially profitable market for airlines. Tourists worried about the virus or the risk of being stranded in a virus-stricken nation are also holding off booking trips.

“It is unclear how the virus will develop, but whether we see the impact contained to a few markets and a $63 billion revenue loss, or a broader impact leading to a $113 billion loss of revenue, this is a crisis,” said Alexandre de Juniac, IATA’s director general and CEO, in a statement.

The IATA has said the impact will be on the same scale to the 2008 financial crisis, when airline shares lost 25% following the collapse of Lehman Brothers.

The virus outbreak hit just as the industry was forecasting mostly solid growth in 2020. United Airlines had forecast a profits between $11 and $13 per share after finishing 2019 with a profit of $11.58 per share.

A key measure of airlines' revenue was expected to rise 4.1% globally, according to the IATA.

All of those forecasts are now in doubt.

United Airlines is slashing capacity by 20% on international routes and by 10% in the U.S. starting in April. The airline also abandoned its financial forecasts for the year and asked employees to volunteer for unpaid leave.

American Airlines suspended flights to Seoul and Milan through April 25th, as well as flights to China. It also scrapped its annual financial forecasts.

Germany's biggest airline, Lufthansa, warned that it might cancel up to half its flights in the next few weeks, depending on how the virus outbreak develops.

Ratings agency Moody’s Investors Service cut its outlook for the industry to negative, saying it expects a sharp decline in passenger demand through the first half of the year. There is no clear picture how the industry will recover until the virus infections subside.

“Major unknowns — uncertainty about the virus's active period, its eventual geographic spread and the scale of infections in a given country or region — complicate efforts to project operational and financial impact for the industry,” Moody’s said.