Because it's safety related, it's a problem for the industry at large. 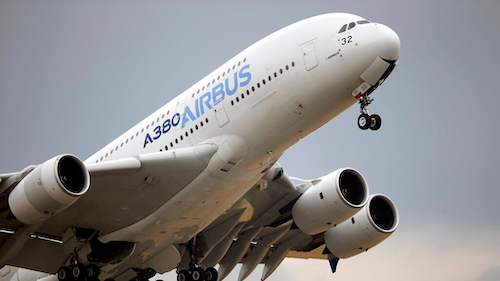 In this June 18, 2015, file photo, an Airbus A380 takes off for its demonstration flight at the Paris Air Show in Le Bourget airport, north of Paris. Commercial airliner maker Airbus is releasing 2019 earnings on Thursday, Feb. 12.
AP Photo/Francois Mori, file

FRANKFURT, Germany (AP) — Airbus' chief executive said Thursday that his company sees no short-term benefit from Boeing's troubles with its grounded 737 MAX because the competing A320 is sold out years ahead.

CEO Guillaume Faury said that safety was a shared concern in the industry. He made the remarks at the company's earnings news conference after it reported a loss of 1.36 billion euros ($1.48 billion) in 2019 because of a multibillion-euro bribery settlement with authorities in three countries.

The company otherwise saw a record year of aircraft deliveries and increased its dividend.

Operating earnings without one-time burdens rose 19% to 6.9 billion euros. The company said Thursday it would propose a dividend of 1.80 euros per share, up 9% from 2017. Revenues rose 11% to 70.5 billion euros as the company ramped up production of its A320 twinjet.

Faury called it “a strong underlying financial performance” while acknowledging that “of course we cannot be satisfied” with the net loss.

Asked how much Airbus had benefited from Boeing's troubles, he said that “it might look like a paradox, but in the short term we do not benefit from the situation with a competitor.”

“It has to do with safety, and safety is paramount for the industry. This is one of the things we all have in common.”

He added that “we cannot take benefits on the 320. We are sold out through 2025 roughly and therefore we cannot step in to offset the needs of airline customers that will not be fulfilled" due to the grounding of the MAX.

Airbus saw deliveries of 863 commercial aircraft, up from 800 in the year before. The company boosted orders to 768 as competitor Boeing stumbled because of the grounding of the 737 MAX jet after two crashes that killed 346 people. Boeing’s net orders were negative because of cancellations and the bankruptcy of a large customer, India’s Jet Airways, and came in at minus 87.

The large net loss reflected 3.6 billion euros set aside to cover a criminal settlement with authorities in the U.S., France and Britain over past corrupt practices. The company also lost 1.2 billion euros because of troubles with its A400M military transport program and 221 million euros because the German government suspended export licenses to Saudi Arabia through March.

Airbus is legally headquartered in the Netherlands but has its main base in Toulouse, France, and factories there and in Hamburg, Germany, Seville, Spain, Tianjin, China, and Mobile, Alabama, in the U.S. It also makes military aircraft, helicopters and satellites.

An industry trade group warned that airlines worldwide could lose up to $113 billion in revenue from the virus.
David Koenig
Mar 12th, 2020

Coworkers were asked to remain home and self-quarantine.
Mar 11th, 2020

Airlines must use 80% of their takeoff/landing 'slots' or risk forfeiting them.
David Koenig
Mar 11th, 2020

Airbus Opens Up to Other Industries

Company to extend expertise in aerodynamics, composite materials and stress analysis to improve automotive and nautical designs, among others.
Mar 11th, 2020