A huge component of a new rocket system was wheeled slowly from a New Orleans spacecraft factory on Wednesday to a barge that will float it up the Mississippi River for testing. 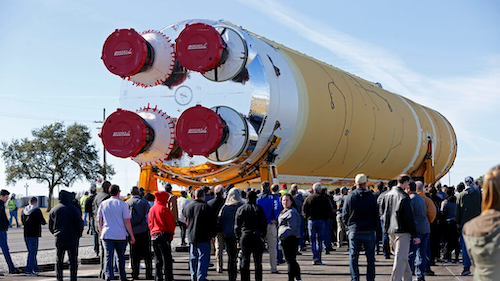 Employees and contractors watch as the core stage of NASA's Space Launch System rocket, that will be used for the Artemis 1 Mission, is moved to the Pegasus barge, at the NASA Michoud Assembly Facility where it was built, in New Orleans, Wednesday, Jan. 8, 2020. It will be transported to NASA's Stennis Space Center in Mississippi for its green run test.
AP Photo/Gerald Herbert

NEW ORLEANS (AP) — With a brass band playing and a parade of workers sporting Mardi Gras beads, a huge component of a new rocket system was wheeled slowly from a New Orleans spacecraft factory on Wednesday to a barge that will float it up the Mississippi River for testing.

The recently completed “core stage” of NASA's Space Launch System, which dwarfed the hundreds of of NASA and Boeing employees, was to be taken to the Stennis Space Center in Mississippi, about 50 miles (80 kilometers) northeast of New Orleans. Space Launch System rockets are expected to eventually take astronauts to the moon as part of NASA's Artemis program.

The core stage — which measures 212 feet (65 meters) from end to end and more than 27 feet (8 meters) in diameter — was transported like a giant Carnival float from the Michoud Assembly Center in eastern New Orleans to the barge as workers took pictures.

It will undergo tests at Stennis ahead of the first Artemis launch, currently planned for 2021, said Tony Castilleja, a systems engineer with the Boeing Space Team.

The SLS core stage, with four huge engines, is the largest rocket stage NASA has assembled since the Apollo stages that first powered crewed missions to the Moon.

It will be used for Artemis I, a test-flight without a crew.

Artemis II is to send up a crewed spacecraft. The third mission, Artemis III, would put a man and woman on the south pole of the moon, with an eye toward a continued presence that would lead eventually to a trip to Mars.

Terry Teal, a NASA employee for 30 years, was among the first sent from Houston to New Orleans to begin work on the SLS rocket eight years ago. He brought his wife and stepdaughter to witness the roll-out. He said it’s an exciting time for those who worked on the rocket and the family members who supported them.

The core stage is the spine of the SLS rocket. Its four RS-25 engines will produce 2 million pounds (8.9 million Newtons) of thrust. The liquid hydrogen tank and liquid oxygen tank hold 733,000 gallons (2.8 million liters) of propellant.

In addition to the tanks, the core stage houses the vehicle’s avionics system including the flight computers, the vehicle navigation system and the main propulsion system, which feeds propellant to the engines.

NASA is working to land the first woman and the next man on the Moon by 2024.

Settlement May Cost Airbus $4B

If Canada declines to purchase the luxurious plane, Mexico will raffle it off.
Associated Press
Jan 29th, 2020

She's been living on the International Space Station since March and returns to Earth on Feb. 6.
Marcia Dunn
Jan 28th, 2020

On Thursday, American Airlines executives said they canceled 10,000 flights in the fourth quarter because of the idled planes.
David Koenig
Jan 23rd, 2020