NASA hired private companies to build and fly the capsules while it focused on a new generation of moonshots and other distant travel. 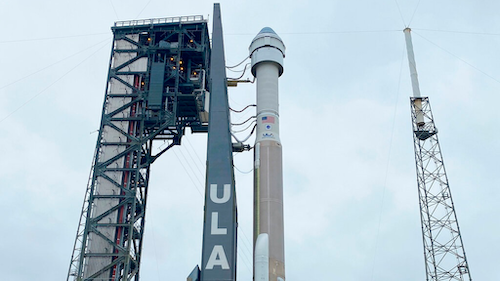 In this photo made available by NASA, Boeing's CST-100 Starliner spacecraft atop a United Launch Alliance Atlas V rocket is rolled out of the Vertical Integration Facility to the launch pad at Space Launch Complex 41 at Cape Canaveral Air Force Station in Florida on Wednesday, Dec. 18, 2019. It is scheduled for liftoff to the International Space Station on Friday.
ULA/NASA via AP

Testing the cosmic waters will be Rosie the mannequin, decked out in Boeing's custom blue spacesuit and a red polka dot bandanna modeled after the World War II riveter.

If the orbital demo goes well, the first Starliner crew could be rocketing to the space station by summer.

SpaceX also is looking to start launching astronauts for NASA, perhaps by spring. It completed a similar test flight of its crew capsule back in March.

The space agency hired the private companies to build and fly the capsules while it focused on a new generation of moonshots and other distant travel. Regardless of which company flies astronauts first, NASA's commercial crew program finally seems to be closing in on the finish line, after years of technical difficulties and delays.

"2020 is the year," program manager Kathy Lueders said this week. "This is really the final trial of these vehicles."

It's been 8 1/2 years since Americans rocketed into orbit from home soil, and everyone — Boeing, SpaceX, NASA, local residents — is anxious for astronaut launches to resume.

Ferguson was the commander of NASA's final space shuttle flight in July 2011, when human launches from Florida ceased. He left NASA and joined Boeing to help develop the Starliner. He's assigned to the first crew, along with two NASA astronauts.

All three will watch Friday's launch from Cape Canaveral Air Force Station. An Atlas V rocket, from United Launch Alliance, is set to blast off with the Starliner just before sunrise.

The test dummy Rosie is outfitted with hundreds of sensors to gauge the stresses of the weeklong flight, from launch and space station docking, through atmospheric re-entry and touchdown in the New Mexico desert. Virtually every capsule system will be tested, including the ultra critical life-support.

The Starliner will carry Christmas presents and treats for the six space station residents, as well as 500 tree seeds similar to the ones that flew to the moon on Apollo 14 in 1971.

Unlike Elon Musk's decade-and-a-half-old SpaceX, Boeing's human spaceflight ties run deep. As a result of company acquisitions, Boeing has partnered with NASA on every domestic astronaut program dating back to Project Mercury.

NASA gave more than $4 billion to Boeing in 2014 to develop and fly the capsule to the space station; the company had been working on it since 2010. SpaceX got $2.6 billion for its crew capsule, an upscale version of its Dragon cargo ship, flying since 2012. Crew capsules turned out to be far more complicated than cargo capsules. Launch dates starting in 2017 came and went, as SpaceX and Northrop Grumman made steady supply runs.

The delays have been costly.

NASA has been shelling out as much as $86 million for a seat on a Russian Soyuz, the only ride to the space station for astronauts since the shuttles' retirement. The space agency's overall Soyuz tab is now in the billions.

Both Boeing and SpaceX have been beset by parachute problems, among other things. Last month, a Starliner landed safely despite only two of three parachutes deploying during a test. The mishap was traced to human error: The parachute rigging was improperly connected.

Boeing also was blasted last month in a NASA audit. According to the inspector general's report, NASA overpaid Boeing as launch delays starting piling up. Boeing disputes the findings.

SpaceX completed its first orbital test flight of the crew Dragon last March, but the capsule was destroyed a month later during testing at Cape Canaveral. Still ahead: an emergency escape test during liftoff, scheduled for January.

On Wednesday, the towering Atlas V rocket was moved to the launch pad with the Starliner on top. White with black and blue trim, the capsule is 16.5 feet (5 meters) tall with its attached service module — the height of a giraffe — and 15 feet (4.5 meters) in diameter.

It can fit up to seven people, though crews typically will number four: two Americans, one Russian and another international astronaut. Boeing eventually wants to sell empty seats to private researchers or even tourists.

In a first for a U.S. crew capsule bound for orbit, the Starliner will aim for a land, versus water, landing. It's reusable and this one will be recycled for the second mission with a crew, including NASA astronaut Sunita Williams.

“Bring it back in good shape,” she urged Boeing this week.