Jeff Bezos' Blue Origin rocket company shot a capsule higher into space Wednesday than it's ever done before. 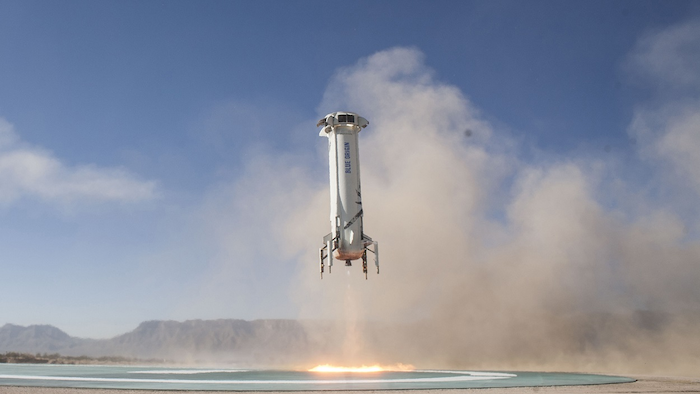 President Donald Trump is asking the government to make it easier for private companies to get to and from space. Trump signed the space policy directive Thursday. He was joined at the White House by Vice President Mike Pence, who heads the National Space Council . During a meeting at Florida's Kennedy Space Center in February, Pence and other council members recommended the government ease restrictions on private U.S. companies like SpaceX and Blue Origin. The reforms are meant to get businesses moving faster and farther into space. White House officials say little change is expected until next year, after the new regulations are written and reviewed. "There are many innovative companies across this nation working hard to build a bright future in space, and our policies should help ensure their success on all fronts," NASA Administrator Jim Bridenstine said in a statement. Trump's first space policy directive, signed in December, puts the moon ahead of Mars for astronaut visits. Image credit: Blue Origi

Jeff Bezos' Blue Origin rocket company shot a capsule higher into space Wednesday than it's ever done before.

The New Shepard rocket blasted off from West Texas on the company's latest test flight. Once the booster separated, the capsule's escape motor fired, lifting the spacecraft to an altitude of 389,846 feet. That's 74 miles or 119 kilometers.

It's part of a safety system intended to save lives once space tourists and others climb aboard for suborbital hops.

Wednesday's passenger was Mannequin Skywalker, an instrumented dummy in a blue flight suit that's flown before, plus science experiments.

The booster and capsule — both repeat fliers — landed successfully. It was the ninth test flight and lasted 11 minutes.

"Crew Capsule looks great even after it was pushed hard by the escape test. Astronauts would have had an exhilarating ride and safe landing," Bezos said in a tweet . "Great engineering and the lucky boots worked again."

Blue Origin has yet to announce when it will start selling tickets or how much flights will cost. Launch commentator Ariane Cornell promised it would be soon. "It's coming," she said.

Bezos, founder and chief executive of Amazon, aims to send people and payloads into orbit from Cape Canaveral. Those missions will rely on the bigger, more powerful New Glenn rocket still under development.