Aviation is soaring: Passenger traffic is up, fuel prices are under control and rising demand from Asia is driving aircraft orders. 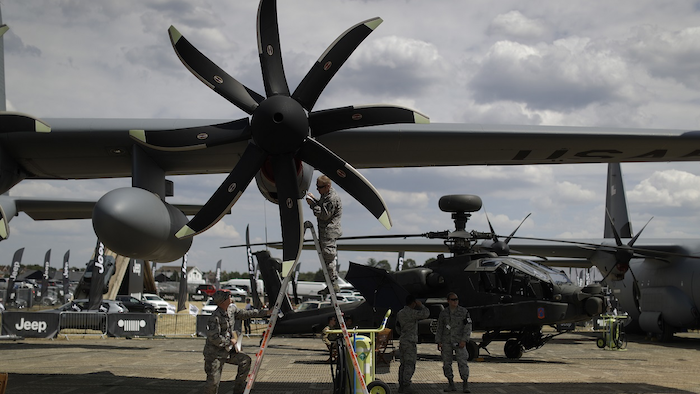 Aviation is soaring: Passenger traffic is up, fuel prices are under control and rising demand from Asia is driving aircraft orders. So what could possibly go wrong?

One big thing: A trade war.

Aircraft makers at this week's Farnborough International Airshow, a biannual extravaganza where billions of dollars of planes and parts are bought, say thousands of jobs are at risk in this most international of industries as U.S. President Donald Trump threatens to raise tariffs on a variety of goods and other countries prepare to retaliate.

While Trump has said trade wars are "good and easy to win," aviation experts say American companies like Chicago-based Boeing will take the first hit because most of U.S. aerospace production goes to foreign buyers.

"Well over of 80 percent of U.S. commercial aerospace is exported," said Richard Aboulafiah, a respected aviation analyst at the Teal Group. "U.S. aerospace is in the front line waiting to get shot first."

That's because aviation is truly global in production and demand. Boeing and Airbus, its European rival based in Toulouse, France, dominate the commercial aircraft market, competing for business and suppliers from China to Qatar and Canada. Being able to shop around for components makes the companies more profitable and its aircraft better.

"Aerospace thrives on free and open trade," Boeing Chief Executive Dennis Muilenburg told the BBC on Monday. "We are concerned it could affect supply chain costs, but those supply chains are flowing in both directions (between China and the U.S.). It is an intricate network around the world."

The U.S. has put tariffs on $34 billion of Chinese goods, with China responding with an equivalent sum. The Trump administration is planning tariffs on another $200 billion in goods. The U.S. has also put tariffs on steel and aluminum from China, the EU and several other countries, which responded in kind.

Boeing, which describes itself as "the top U.S. exporter," reported revenue of $93.4 billion last year. It employs more than 140,000 people in the U.S. and 65 foreign countries.

Almost 80 percent of the 713 commercial aircraft orders for which Boeing identified a buyer last year came from foreign companies, according to data on Boeing's website. Flydubai, a low-cost carrier based in the United Arab Emirates, ordered 175 Boeing 737 Max aircraft in December, the company's single biggest order of the year.

China, which has been the target of much of Trump's ire when it comes to trade, is also a major customer for Boeing. Chinese companies, including the China Development Bank Financial Leasing Co. and China Aircraft Leasing Group, ordered 120 Boeing planes last year.

Mindful of aviation's economic importance, the Trump Administration is sending a high-powered delegation to Farnborough hoping to persuade the world to buy American. What they will encounter is a global industry worth some $838 billion in trade and investment that employs millions and supports the defense of the U.S. and its allies.

Boeing is just one of 108 U.S. companies showing off their wares at Farnborough, including major defense contractors such as Lockheed Martin, Northrup Grumman and Raytheon. Exhibitors reported orders for 856 aircraft and 1,407 engines worth $116.6 billion during the last Farnborough air show in 2016.

But behind the headline-grabbing deals, smaller companies, many of whom are suppliers for the likes of Boeing and Airbus, can't help but cast a wary eye on the proceedings.

Kavita Dawson, president of Maven Engineering Corp. of Rockville, Maryland, which supplies spare parts for aircraft, locomotives, and the oil and gas industry, counts Lockheed and the U.S. Department of Defense among its customers.

Dawson said the cost of steel and aluminum, which were hit by the first round of U.S. tariffs, has risen by 10 percent to 15 percent in the last few months, which translates into higher manufacturing costs. A lot of Maven's contracts were secured months ago, so the company has had to absorb the increased costs.

Dawson said that while she appreciates Trump's desire to help U.S. companies, some international customers are concerned about his comments on trade.

"There is definitely some backlash to the rhetoric," she said. "I appreciate his efforts, but it might not be a bad thing to tone it down just a little bit. It would be helpful to U.S. business if the countries we deal with feel like we have their back and they have our back — that we're partners."

Not far away, John Ashour, president of InterConnect Wiring, which employs 140 people and is based in Fort Worth, Texas, is backing Trump, despite concerns about a gradual escalation in tensions.

InterConnect makes high-end cables for big aircraft makers including Bell Helicopter, BAE Systems and Airbus and believes his customers will keep coming back because the company offers the best service possible.

"We have not changed our approach to business because of this," Ashour said. "I'm personally not worried about it right now. I'm believing in our president."