A SpaceX Falcon 9 rocket successfully launched a pair of U.S.-German science satellites and five commercial communications satellites into orbit from California on Tuesday. 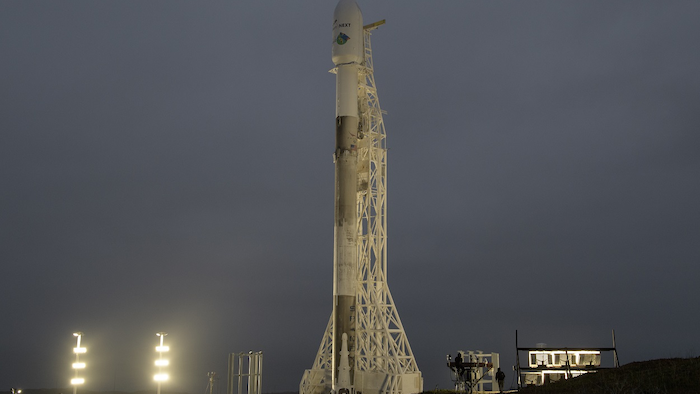 In this photo provided by NASA, the SpaceX Falcon 9 rocket is seen with the NASA/German Research Centre for Geosciences GRACE Follow-On spacecraft and onboard, Monday, May 21, 2018, at Space Launch Complex 4E at Vandenberg Air Force Base in California. Image credit: Bill Ingalls/NASA via AP

A SpaceX Falcon 9 rocket successfully launched a pair of U.S.-German science satellites and five commercial communications satellites into orbit from California on Tuesday.

The rocket roared off from a pad at Vandenberg Air Force Base at 12:47 p.m. and arced over the Pacific Ocean west of Los Angeles as it headed toward the South Pole.

Its upper stage deployed the research satellites minutes after reaching orbit. The satellites for Iridium Communications' next-generation fleet were released in a process completed a little more than an hour after liftoff.

The Falcon 9's first stage was previously used for a launch from Florida in January. SpaceX did not attempt to recover it this time.

The science payload from NASA and the German Centre for Geosciences included two identical satellites for the agencies' Gravity Recovery and Climate Experiment-Follow On mission, continuing the work of two predecessor spacecraft that spanned 15 years ending last October.

Called GRACE-FO, for short, the mission will detect the movement of Earth's water masses and changes in mass within the planet by measuring variations in gravity through tiny fluctuations in the distance between the two satellites as they orbit 137 miles (220 kilometers) apart — roughly the distance between Los Angeles and San Diego — at an altitude of about 304 miles (490 kilometers).

"GRACE was really a revolutionary mission for us understanding the water cycle and how the climate behaves and the trends which are taking place over the last 10 or 15 years," Frank Webb, GRACE-FO project scientist, told a pre-launch press conference.

The technique, for example, has shown reductions of mass in Greenland and Antarctica due to enormous losses of water into the oceans each year. GRACE also showed how central California was affected by recent years of drought as water was pumped from a major aquifer, Webb said.

"During that drought California lost weight — water weight — as farmers and agriculture pumped out more water to meet the needs that weren't being met by the snowpack in the mountains with the rainfall," Webb said.

There was some recovery in the amount of mass — water in the ground — due to heavy rains just as the original GRACE mission was ending, but despite the gap in measurements, the new mission will allow scientists to see how much water stayed in the ground and how much ran off into the ocean, Webb said.

NASA contributed $430 million to the new mission and the German contribution was 77 million euros, officials said.

The commercial side of the launch was the sixth in Iridium Communications' $3 billion campaign to replace its entire fleet of globe-circling satellites for mobile communications.

The McLean, Virginia, company now has 55 Iridium NEXT satellites in orbit. Two more launches will increase the number to 75, including 66 operational satellites and nine spares. An additional six spares will remain on the ground until needed.