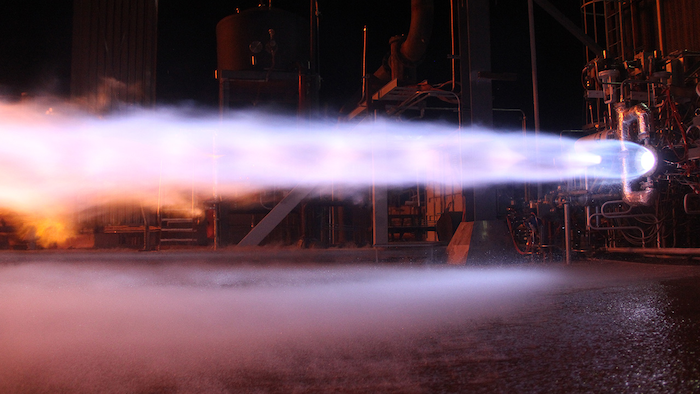 Blue Origin completes a combustion test in the development of its BE-4 engine. (Photo courtesy of Blue Origin)

Blue Origin is taking another significant step in their vision of shuttling humans to space: the development of an all-powerful rocket engine.

Blue Origin made headlines around the world last month when the private spaceflight company successfully launched and landed a reusable space vehicle.

After the benchmark landing in November, Blue Origin founder Jeff Bezos touted his company’s accomplishment and, once again, clarified his overarching vision.

He wrote on the Blue Origin blog that “We are building Blue Origin to seed an enduring human presence in space, to help us move beyond this blue planet that is the origin of all we know. Our fantastic team . . . is working hard not just to build space vehicles, but to bring closer the day when millions of people can live and work in space.”

Rob Meyerson, the President of Blue Origin, told Business Insider that the BE-4 engine will begin full-engine testing next year with the hopes of concluding qualification testing by the end of 2017.

This week Bezos even offered to save Republican presidential hopeful Donald Trump a seat on a Blue Origin rocket.

What do you think about the BE-4 engine? Could this monster of an engine really shuttle humans into space? Comment below or tweet me @MNetAbbey.