First US Shipment In Months Flying To Space Station

The Orbital ATK capsule is scheduled to arrive at the International Space Station Wednesday. 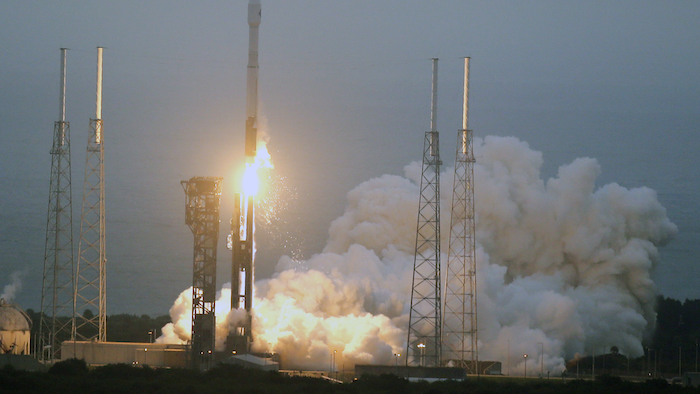 A U.S. shipment of much-needed groceries and other astronaut supplies rocketed toward the International Space Station for the first time in months Sunday, reigniting NASA's commercial delivery service.

If the Orbital ATK capsule arrives at the space station Wednesday as planned, it will represent the first U.S. delivery since spring.

More than anyone, perhaps, the six space station astronauts were thrilled following all the weather-related delays. They managed to photograph the rising rocket from their windows as both craft sailed over the Atlantic. "Caught something good on the horizon," commander Scott Kelly reported in a tweet.

To NASA's relief, the weather cooperated after three days of high wind and cloudy skies that kept the Atlas V rocket firmly on the ground. Everything came together on the fourth launch attempt, allowing the unmanned Atlas to blast off with 7,400 pounds of space station cargo, not to mention some Christmas presents for the awaiting crew.

The Atlas soared through clouds and, 21 minutes later, ended up placing the Cygnus cargo carrier in the perfect orbit. Ecstatic launch controllers applauded, shook hands and hugged one another. "We're real happy to be back in space," said Frank Culbertson, president of Orbital's space systems group.

United Launch Alliance manager Vernon Thorp couldn't help but notice all the number fours in Sunday's launch equation. Liftoff occurred at 4:44 p.m. on the fourth launch attempt, and Orbital's designation for the mission was — yep — number four. "I guess the numbers just all lined up right today," Thorp told reporters.

The space station astronauts — two of them, including Kelly, deep into a one-year mission — have gone without American shipments since April. Two private companies contracted for more than $3.5 billion by NASA to replenish the 250-mile-high lab are stuck on Earth with grounded rockets. Orbital ATK bought the United Launch Alliance's rocket, the veteran Atlas V, for this supply mission. Orbital's previous grocery run, its fourth, ended in a fiery explosion seconds after liftoff in October 2014. SpaceX, the other supplier, suffered a launch failure in June on its eighth trip.

Russia also lost a supply ship earlier this year. But it picked up the slack and has another resupply mission scheduled just before Christmas; Japan has chipped in as well.

Much-needed food is inside Orbital's cargo carrier, named Cygnus after the swan constellation. NASA normally likes to have a six-month stash of food aboard the space station, but it's down a couple months because of the three failed flights. Space station program manager Kirk Shireman expects it will take another year to get the pantry full again — provided there are no more accidents.

This is the first time that the United Launch Alliance's Atlas V has served the space station. Normally used for hefty satellite launches, it is the mighty successor to the Atlas used to put John Glenn into orbit in 1962. Boeing intends to use the Atlas V to boost the Starliner capsules it's building to ferry astronauts to the space station beginning in 2017.

Orbital plans to use another Atlas rocket for a supply run in March, then return its own Antares rocket to flight from Virginia in May.

While acknowledging 2015 has been a difficult year because of the disrupted supply chain, Shireman said commercial space is inevitable and will drive down launch costs. NASA's 30-year shuttle program proved expensive and complicated, and, on two flights, deadly.

"It is our future," Shireman stressed last week.

The Cygnus launched Sunday is named after Mercury 7 astronaut Deke Slayton, a pioneer in commercial spaceflight before his death in 1993.