No one was injured, but the $200M mission and the launch complex were ruined. 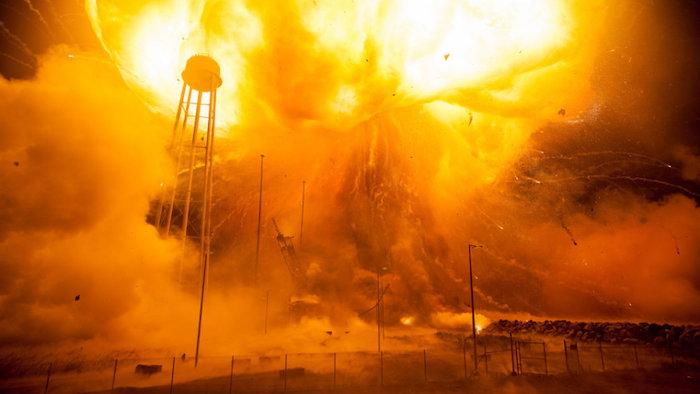 The launch of an unmanned commercial supply rocket on the eastern shore of Virginia was supposed to be a moment of celebration for NASA. Crowds gathered to watch as the sun set. Hundreds of miles up, astronauts huddled around a live video feed in anticipation.

But cheers were quickly replaced with screams as the Antares rocket bound for the International Space Station exploded six seconds after liftoff on Oct. 28, 2014, marking the first catastrophic launch in NASA's commercial spaceflight effort.

More than a year after the blast, NASA released images this week showing the fiery explosion that lit up the sky and sent scorched wreckage flying.

NASA's independent review team said last week that the initial fire was caused by friction from rubbing parts in a turbopump in one of the rocket's old Russian-built engines. The pump exploded seconds after liftoff, damaging a second engine, according to NASA's report. As the rocket fell toward the ground, controllers sent a destruct signal just before impact to minimize damage.

The rocket was supposed to send food, clothes and equipment to astronauts in the International Space Station. No one was injured in the blast, but the $200 million mission and the Wallops Island launch complex were ruined.