An aviation museum announced Monday it has signed an agreement to buy a 144,000-square-foot slice of the Michigan factory where the original Rosie the Riveter worked during World War II. 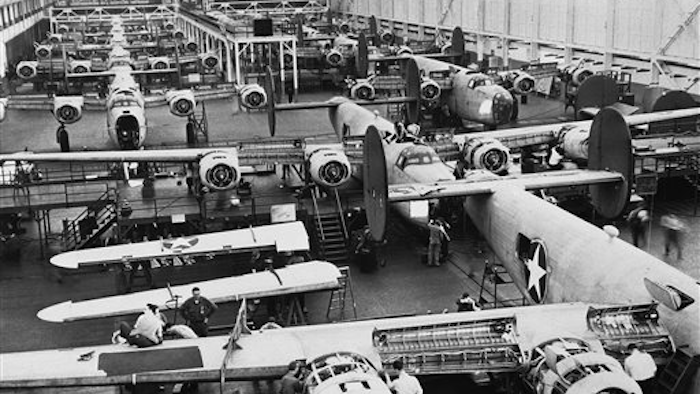 DETROIT (AP) -- An aviation museum announced Monday it has signed an agreement to buy a 144,000-square-foot slice of the Michigan factory where the original Rosie the Riveter worked during World War II.

The Yankee Air Museum, through the Save the Willow Run Bomber Plant campaign, raised close to $8 million by the May 1 deadline set by the factory's owner, the Revitalizing Auto Communities Environmental Response Trust. The trust took over sites around the U.S. left behind in General Motors' bankruptcy.

Organizers want to convert the factory — where Rose Will Monroe and other workers built B-24 bombers — into the new home of the Yankee Air Museum, dedicated to aviation and all the other Rosies who toiled at similar U.S. plants to aid the war effort.

"We are now in a pre-closing inspection period," the museum said in a statement Monday. "During inspection, we are trying to identify and address any issues that could complicate making a new home for the Yankee Air Museum in the bomber plant."

The museum said it expects to close on the purchase in a few weeks if no unresolvable problems are found during inspection.

Once the museum closes on the property, officials said they will host "an event to thank our supporters and celebrate the successful conclusion of the first phase of the Save the Bomber Plant Campaign."

RACER Trust is overseeing the demolition of the massive plant west of Detroit, a process that is not expected to be finished until later this year.

The Willow Run factory, which was built by Ford Motor Co. and featured a mile-long assembly line, churned out one B-24 Liberator bomber every hour and nearly 9,000 in all.

It transitioned to producing cars after the war ended and continued making them and parts for more than a half-century under the General Motors name before closing for good four years ago.

The Ypsilanti Township plant is being torn down in part to make way for a connected vehicle research center.