Boeing Co. said Monday that U.S. and European regulators have approved its newest and larger version of the 787 passenger jet for commercial flying. 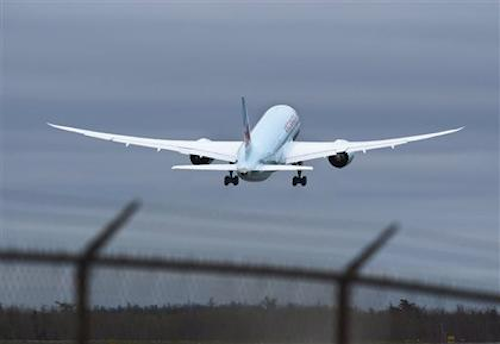 EVERETT, Wash. (AP) -- Boeing Co. said Monday that U.S. and European regulators have approved its newest and larger version of the 787 passenger jet for commercial flying.

The company says that the first Boeing 787-9 is undergoing final preparation before being delivered to Air New Zealand.

The new plane is 20 feet longer and able to carry more passengers than the original 787-8. Boeing says the planes, which it calls the Dreamliner, use 20 percent less fuel and produce 20 percent less emissions than other planes of the same size. Boeing reduces weight and fuel burn by using composite materials for about half of the plane, according to the company website.

The U.S. Federal Aviation Administration and the European Aviation Safety Agency certified the 787-9 for commercial service. Boeing said the certification process involved ground and laboratory tests on five planes and more than 1,500 hours of flight testing.

Dreamliners were grounded worldwide last year after batteries on two of the planes overheated. The planes were allowed to fly again after regulators approved a fix by Boeing that included encasing the battery cells in steel to contain any fires.