The private gathering occurred in October during an aerospace conference in Seattle, Inslee spokesman David Postman said on Monday after The Associated Press identified the meeting in records obtained under public records law. Postman said the governor talked with Barry Eccleston, the president and CEO of Airbus Americas, for about 20 minutes. 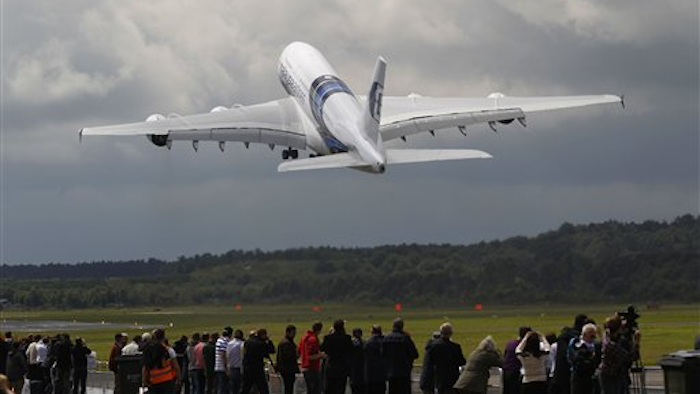 SEATTLE (AP) — Washington Gov. Jay Inslee personally met with an Airbus executive recently to discuss how the state and the Boeing rival can work together.

The private gathering occurred in October during an aerospace conference in Seattle, Inslee spokesman David Postman said on Monday after The Associated Press identified the meeting in records obtained under public records law. Postman said the governor talked with Barry Eccleston, the president and CEO of Airbus Americas, for about 20 minutes.

"The bulk of the conversation was the governor touting our suppliers," Postman said. Eccleston oversees Airbus operations in North and South America.

Washington has been expanding its relationship with Airbus this year, with government officials traveling to the company's U.S. headquarters and signing a five-year confidentiality agreement to further explore business opportunities. Inslee has said the state is always looking for ways to increase aerospace employment in Washington state, either with Boeing Co. or other companies.

In 2011 and 2012, former Gov. Chris Gregoire met with Airbus officials in Europe as part of a variety of meetings surrounding air shows there. In the recent meeting, Inslee had been invited to speak at an event organized by the British American Business Council, and emails show that Inslee aides worked to arrange a private meeting with Eccleston after the governor's remarks.

Boeing has a 100-year history in Washington state and is promoted around the world by Washington state politicians. But the company has increasingly been working with other locations, moving its headquarters to Chicago and opening a production line in South Carolina.

Now, as it looks for a cheaper place to build its 777X passenger plane, Boeing has been exploring bids from 22 states that could send thousands of jobs elsewhere.

Postman emphasized the Airbus talks have no connection to Boeing's looming decision on where it will build the new 777X plane.

David Williams, vice president of procurement for Airbus Americas, has praised the state for its depth of expertise, experience and maturity in the aerospace sector.