Devising a way to one day land astronauts on Mars is a complex problem and NASA scientists think something as simple as a child's toy design may help solve the problem. Safely landing a large spacecraft on the Red planet is just one of many engineering challenges the agency faces as it eyes an... 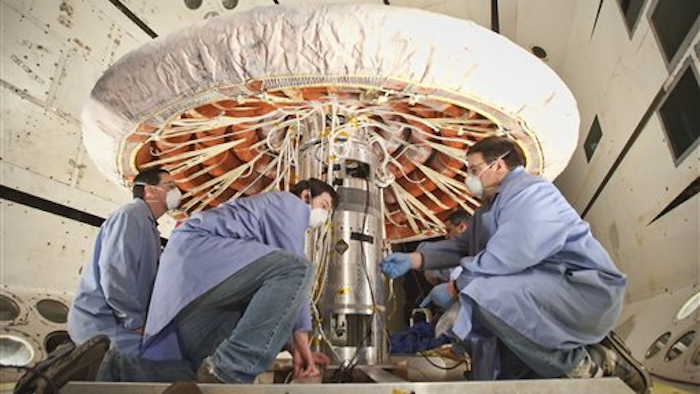 Devising a way to one day land astronauts on Mars is a complex problem and NASA scientists think something as simple as a child's toy design may help solve the problem. Safely landing a large spacecraft on the Red planet is just one of many engineering challenges the agency faces as it eyes an ambitious goal of sending humans into deep space later this century.

At NASA's Langley Research Center in Hampton, engineers have been working to develop an inflatable heat shield that looks a lot like a super-sized version of a stacking ring of doughnuts that infants play with. The engineers believe a lightweight, inflatable heat shield could be deployed to slow the craft to enter a Martian atmosphere much thinner than Earth's.

Such an inflatable heat shield could help a spacecraft reach the high-altitude southern plains of Mars and other areas that would otherwise be inaccessible under existing technology. The experts note that rockets alone can't be used to land a large craft on Mars as can be done on the atmosphereless moon. Parachutes also won't work for a large spacecraft needed to send humans to Mars, they add.

Hence the inflatable rings. The rings would be filled with nitrogen and covered with a thermal blanket. Once deployed for landing, the rings would sit atop the spacecraft, somewhat resembling a giant mushroom.

"We try to not use propulsion if we don't have to," said Neil Cheatwood, the senior engineer at Langley for advanced entry, descent and landing systems. "We make use of that atmosphere as much as we can, because it means we don't have to carry all that fuel with us."

NASA's leaders acknowledge that getting humans safely to and from Mars as early as the 2030s will poses extreme challenges. The agency's scientists acknowledge they also must design new in-space propulsion systems, advanced spacesuits, long-term living habitats aboard spacecraft — even communication systems for deep space.

When an unmanned private rocket destined for the International Space Station exploded in October soon after liftoff from Wallops Island, Virginia, numerous scientific experiments went up in flames with it. But one NASA experiment that Orbital Sciences Corp. originally invited aboard — for a second-generation inflatable spacecraft — never made it for lack of time to get it together, NASA officials say.

That experiment calls for testing how second-generation inflatable spacecraft technology performs upon re-entry in Earth's atmosphere. The test is important because NASA officials believe an inflatable heat shield could be what helps them land astronauts on Mars and return larger loads of supplies from the International Space Station. The experiment is now scheduled to go up on the next Antares rocket in 2016.

New technology is needed to get astronauts to Mars because the type of spacecraft that would land humans would be much larger than anything that's landed on the planet previously. Current heat shield technology weighs too much to be on larger spacecraft, which means scientists can't land anything much larger than the rovers that have been sent there previously. NASA has relied on parachute-based deceleration on Mars since the Viking program in the 1970s.

Engineers at Langley have been working on the inflatable technology for about a decade, and believe it is close to being ready for operational use. "If I had the budget and we had the funding to do it, I think we could get as large a scale as needed for humans in five to ten years," Cheatwood said.

He said the same inflatable technology could also be used for spacecraft to explore other planets or objects with atmospheres, such as Venus, Titan and Jupiter.

Because the inflatables are made of lightweight material and filled with Nitrogen, more room is left aboard a spacecraft for science experiments and other things astronauts will need. The inflatable is covered by a thermal blanket of layers of heat-resistant materials.

"The idea is that you would have something that could be packed up, put in a very small volume and then deployed into a very large size," Anthony Calomino, principal investigator for materials and structures for hypersonic re-entry at Langley.

He said in a statement in April: "Think airbag, something we could pack into compressed volume that will fit the size limits of a launch shroud, but allow for a much larger aeroshell."

Smaller scale, inflatable experiments have been launched on rockets before, but never into orbit. That work was recently part of a NASA review in October. The information gathered from those earlier projects will be applied to the upcoming, larger-scale experiment in 2016.

It still won't be large enough to protect a spacecraft carrying astronauts, but NASA scientists believe the technology is sound.

"When you first tell people you're going to do an ... inflatable spacecraft, they have in their minds something really floppy like a jellyfish and it's really not that way," Cheatwood said. "They're very durable ... This is a technology that I think is ready to use, whether it's for humans in 20 years on Mars or whether it's a large robotic mission sooner than that."