NASA's biggest test flight in years remains on track for next month, despite last week's space-related accidents. Officials said Thursday everything looks good for the Dec. 4 launch of NASA's new Orion capsule. This one will not carry a crew. Future Orions are meant to carry... 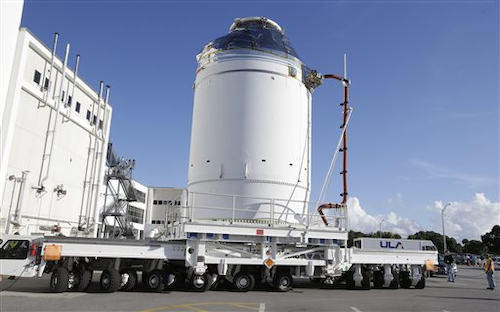 Officials said Thursday everything looks good for the Dec. 4 launch of NASA's new Orion capsule. This one will not carry a crew. Future Orions are meant to carry astronauts on missions of deep-space exploration, including, one day, trips to Mars.

The spacecraft will blast off atop a Delta IV rocket from Cape Canaveral, Florida. The four-hour flight will send it on two laps around Earth — and as far as 3,600 miles into space — before parachuting into the Pacific, Apollo style.

William Hill, who helps run exploration systems development for NASA, said the test flight systems have nothing in common with either the Orbital Sciences rocket that blew up at liftoff on Oct. 28 or the Virgin Galactic SpaceShip Two destroyed in flight last Friday. So no reviews were needed, and no plans have been changed.

"Space operations is hard, and they proved that last week," Hill told reporters. "It was a tough week. It's a tough business we're in."

Mark Geyer, Orion's program manager for NASA, said even before the back-to-back accidents, everyone involved with the upcoming test flight recognized just how difficult it is to send up spacecraft, especially those designed for humans. The two events serve as an important reminder more than anything, he said.

The whole idea of the test flight, Geyer said, is "to learn about where the challenges are so we can minimize the risk when we actually put people on board." The capsule will be equipped with 1,200 sensors to measure vibration, heat and noise, among other things.

The flight test readiness review a couple weeks ago already was "very thorough," Geyer noted, and the NASA-Lockheed Martin Corp. team is going into it with "our eyes wide open and making sure that we all understand the risks."

NASA is paying Lockheed Martin to carry out this mission, which is valued at $370 million, excluding the Orion capsule itself. The space agency plans to reuse the capsule in a practice launch abort around 2019, a year after the second Orion flight. That second unmanned flight will be with NASA's new megarocket that's still under development, called SLS for Space Launch System.

Astronauts are expected to start flying on Orion in 2021. The capsules are built for four passengers, one more than the old Apollo spacecraft.

Orion is intended for true outer-space exploration; the crew capsules under development by two U.S. companies for NASA are intended solely for transporting astronauts to the International Space Station