Federal accident investigators have an early sense of what went wrong before an experimental spaceship designed to ferry tourists beyond the Earth's atmosphere broke apart during a test flight. But they still don't know why the craft prematurely shifted its shape prior to the deadly... 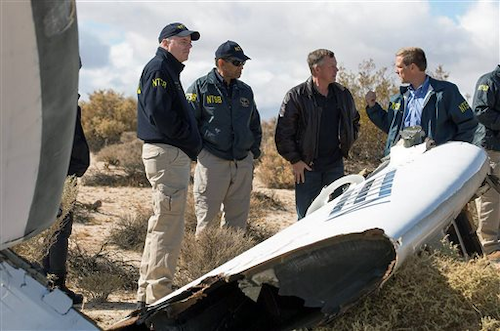 Federal accident investigators have an early sense of what went wrong before an experimental spaceship designed to ferry tourists beyond the Earth's atmosphere broke apart during a test flight. But they still don't know why the craft prematurely shifted its shape prior to the deadly crash.

And another question looms: How far will the accident push back the day when paying customers can routinely rocket dozens of miles into the sky for a fleeting feeling of weightlessness and a breathtaking view?

National Transportation Safety Board investigators worked Monday at the main wreckage area where Virgin Galactic's SpaceShipTwo fell to the ground in the Mojave Desert, but also collected tiny debris 35 miles away. The accident killed the co-pilot and badly injured the pilot who parachuted out of the ship Friday.

Acting NTSB Chairman Christopher Hart said cockpit video and data showed that the co-pilot unlocked SpaceShipTwo's unique "feathering" system earlier than planned. The system works somewhat like the wing flaps that airplanes use to slow for landing — except that SpaceShipTwo's twin tails rotate up at a far more extreme angle, to a position that creates strong resistance and slows the descent.

But while the co-pilot unlocked the system before planned, that action alone should not have been enough to change the craft's configuration. Activating the feathering system requires the pulling of a lever — not unlike how a gun fires only when the trigger is pulled, not just because the safety has been disengaged.

Investigators believe once the feathers were unlocked, "aerodynamic forces" buffeting the craft as it hurtled along at about 760 mph caused the feathers to start rotating, NTSB spokesman Peter Knudson said Monday. Within a few seconds, the craft began to disintegrate, NTSB investigators determined.

SpaceShipTwo is carried aloft on the underside of a jet-powered mother ship. It then drops from that ship and fires its own rocket to head higher. The feathers are not supposed to engage until the craft reaches a speed of Mach 1.4, or more than 1,000 mph, Hart told reporters.

Knudson said a final cause will take months to determine and investigators were looking into other factors, including pilot training, mechanical failure, and design flaws.

Passenger jets typically fly about 7 miles high. Virgin Galactic envisions flights with six passengers climbing to more than 62 miles above Earth. Seats sell for $250,000 and the company says it has booked passengers including Justin Bieber, Ashton Kutcher and Russell Brand.

The ultimate goal of Virgin Galactic co-owner Richard Branson is to create an industry that can move people around the globe in a fraction of the time it takes passenger jets, by rocketing them into space and back down.

But the company now lacks not only a craft to fly but also an understanding of what caused the crash.

Though rival companies also are pushing ahead, the dawn of space tourism seems to have been pushed beyond the horizon yet again.

SpaceShipTwo has been under development for years, and Branson originally predicted passengers would be enjoying the wonders of flight by now. In the weeks before the crash, he said he hoped to fly next year.

Branson still plans to be on the maiden voyage. He said that day will not come before a new round of crew-only flights.

To give the fledgling commercial space industry space to innovate, the Federal Aviation Administration has not overregulated test flights during the past decade, according to Diane Howard, an assistant professor at Embry-Riddle Aeronautical University who specializes in space law.

But the crash could allow the FAA to propose new rules affecting future Virgin Galactic flights, and "it will be very interesting to see how Congress and the FAA and industry respond," Howard said.

The FAA did not immediately comment Monday. The agency is able to initiate a rule-making process that would affect the design or operation of a spacecraft involved in a fatal accident, but is unlikely to do so before the end of the NTSB's investigation.