Solar-Powered Plane Takes Off For Flight Around The World

A Swiss solar-powered plane took off from Abu Dhabi early Monday, marking the start of the first attempt to fly around the world without a drop of fuel. Solar Impulse founder André Borschberg was at the controls of the single-seater when it took off from the... 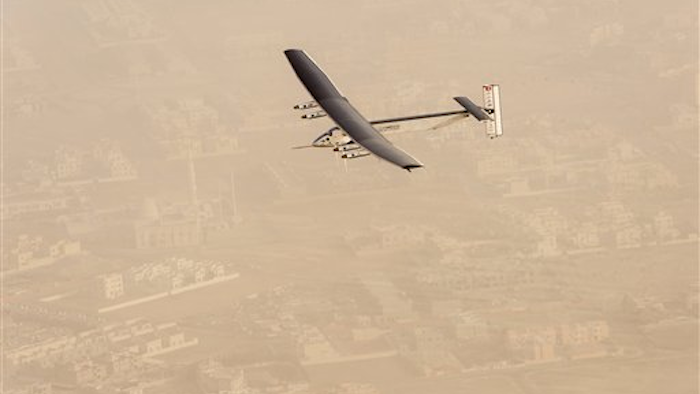 A Swiss solar-powered plane took off from Abu Dhabi early Monday, marking the start of the first attempt to fly around the world without a drop of fuel.

Solar Impulse founder André Borschberg was at the controls of the single-seater when it took off from the Al Bateen Executive Airport. Borschberg will trade off piloting with Solar Impulse co-founder Bertrand Piccard during stop-overs on a journey that will take months to complete.

The Swiss pilots say their aim is to create awareness about replacing "old polluting technologies with clean and efficient technologies."

The plane is expected to reach its first destination — Muscat, Oman — after about 10 hours of flight.

Some legs of the trip, such as over the Pacific and Atlantic oceans, will mean five or six straight days of flying solo.

The lightweight Solar Impulse 2, a larger version of a single-seat prototype that first flew five years ago, is made of carbon fiber and has 17,248 solar cells built into the wing that supply the plane with renewable energy. The solar cells recharge four lithium polymer batteries.

The plane in June made an inaugural flight of two hours and 17 minutes above western Switzerland, just two months after it was unveiled.

After Oman, the plane will head to India, where it will make two stops, then to China and Myanmar before heading across the Pacific and stopping in Hawaii. Then it will head to Phoenix, Arizona, and New York's biggest airport, John F. Kennedy International. The path across the Atlantic will depend on the weather and could include a stop in southern Europe or Morocco before ending in Abu Dhabi.

The round-the-world trip is expected to end in late July or even August.

Borschberg and Piccard say they want to push politicians, celebrities and private citizens to "confront the Conference on Climate Change of the United Nations, which will define the new Kyoto protocol in December 2015 in Paris." All countries are supposed to present targets for a new global climate agreement that governments plan to adopt at the meeting.

The UAE-based Masdar, the Abu Dhabi government's clean-energy company, is a key sponsor of the flight. Additional sponsors include Omega, Google and Moet Hennessey, among others.