PARIS (AP) — At least five drones flew over the Eiffel Tower, the U.S. Embassy and other Paris landmarks overnight, authorities said Tuesday. It was the most audacious of several mysterious drone overflights around France in recent months. An investigation is underway into who was operating the... 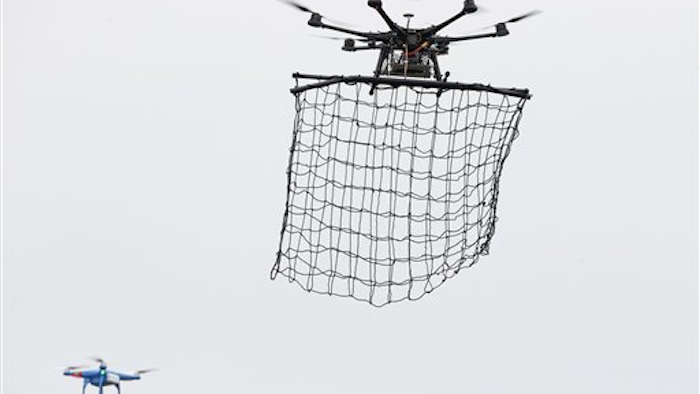 At least five drones flew over the Eiffel Tower, the U.S. Embassy and other Paris landmarks overnight, authorities said Tuesday. It was the most audacious of several mysterious drone overflights around France in recent months.

An investigation is underway into who was operating the latest drones buzzing over Paris, and why. Such flights are banned over Paris skies.

The drones flew in three stages while the capital was under darkness, said Paris prosecutors' spokeswoman Agnes Thibault-Lecuivre. First, one was spotted above the U.S. Embassy, then one at the Eiffel Tower, and then later drones were spotted over the Louvre Museum in central Paris, the Bastille monument to the French Revolution in eastern Paris, the Montparnasse tower in southern Paris, and the Interior Ministry headquarters, she said.

A Paris police official said at least five drones were involved. Officials with the police, gendarmes and prosecutor's office said it's unclear who was behind the flights and even whether they were all coordinated. The U.S. Embassy would not comment on the incident.

A small drone crashed on the White House lawn last month, raising U.S. concern about the phenomenon. In France it is a growing worry after dozens of sightings of mystery drones over nuclear plants and military installations — and one over the presidential palace. Investigators have yet to find most of the perpetrators.

French authorities have said the drones currently present no threat, but the government is trying to find ways to counteract the devices. Some fear the drones could be spying on technology or could one day be equipped with weapons.

Drone operator Jean-Luc Fournier, who has consulted on French drone legislation, said authorized operators condemn such rogue flights because it casts the whole industry in a bad light.

He said such flights raise tension, with Paris already on edge after deadly terrorist attacks last month by Islamic radicals.