The Federal Aviation Administration will begin considering a recommendation next week that it ease restrictions on airline passengers' use of smartphones, tablets, e-readers and other personal electronic devices during takeoffs and landings. 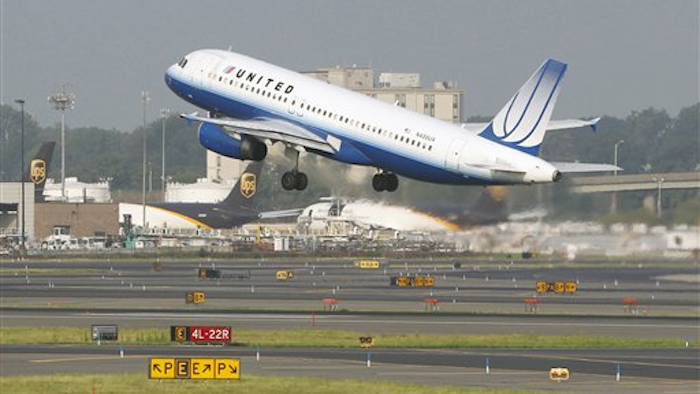 WASHINGTON (AP) -- The Federal Aviation Administration will begin considering a recommendation next week that it ease restrictions on airline passengers' use of smartphones, tablets, e-readers and other personal electronic devices during takeoffs and landings.

A 28-member advisory committee agreed on the recommendation during a closed-door meeting Thursday, industry officials familiar with the deliberations said. The recommendation will be included in a report to be delivered to the FAA on Monday, they said.

The officials asked not to be identified because the FAA has urged committee members not to talk to the media or to publicly discuss the recommendation.

Under the advisory committee's recommendation, passengers would have greater opportunity to use most devices below 10,000 feet altitude, although some devices would have to be switched to airplane mode. Downloading data, surfing the Web and talking on the phone still would be prohibited.

"You will be able to read or work on what's stored on the device," he said. "You want to edit that PowerPoint? Great. You want to watch 'Breaking Bad' and you have it downloaded to your smartphone or your tablet, you can continue to do that."

Passengers are currently required to turn off phones and other electronic devices while planes are below 10,000 feet to prevent interference with sensitive cockpit equipment. Takeoffs and landings are the most critical phases of flight. But newer aircraft are better equipped to prevent electronic interference, and critics long have complained that the safety concerns behind the regulations are groundless.

"We've been fighting for our customers on this issue for years — testing an airplane packed full of Kindles, working with the FAA and serving as the device manufacturer on this committee," Amazon spokesman Drew Herdener said in a statement. "This is a big win for customers and, frankly, it's about time."

"These devices are not dangerous. Your Kindle isn't dangerous. Your iPad that is on airplane mode is perfectly safe," Sen. Claire McCaskill, D-Mo., who has been pressing the FAA to lift the restrictions, said in an interview.

Not everyone agrees. There have been many reports from pilots over the years of electronic interference that appeared to have been caused by passenger use of devices. Technical panels that have looked into the issue in the past concluded evidence that the devices were safe wasn't sufficient to merit lifting restrictions.

But Delta Airlines said in a letter to the FAA last year that out of 2.3 million flights over two years, the airline received 27 reports from pilots and maintenance crews of possible device interference. None of the reports could be confirmed, the letter said.

It's up to FAA officials whether to follow the committee's recommendations. The agency created the committee, put several of its employees on the panel and was closely involved in the deliberations, so it's expected that all or most of the recommendations will be implemented. How long that will take is unclear.

Airline passengers could see restrictions lifted as soon as early 2014 if the agency chooses a faster implementation track, or the process could drag on a year or more if airlines have to apply carrier by carrier to have their planes approved as safe for use of the devices, industry officials said.

McCaskill said that if FAA officials don't "act swiftly" to implement the recommendations, she'll introduce legislation to force their hand.

The FAA doesn't have the authority to lift restrictions on cellphone calls. The Federal Communications Commission, which regulates the cellphone industry, has opposed allowing passengers on fast-moving planes to make phone calls, citing potential interference with cellular networks as phones in the sky skip from cell tower to cell tower faster than networks can keep up.