The landing of the X-47B experimental aircraft means the Navy can move forward with its plans to develop another unmanned aircraft that will join the fleet alongside traditional airplanes to provide around-the-clock surveillance while also possessing a strike capability. 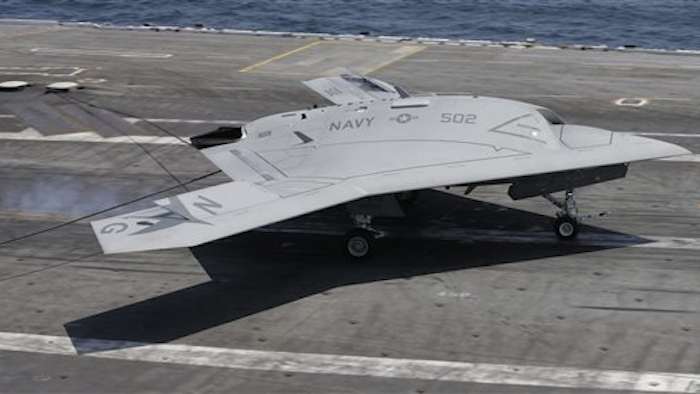 ABOARD THE USS GEORGE H.W. BUSH (AP) -- The Navy successfully landed a drone the size of a fighter jet aboard an aircraft carrier for the first time Wednesday, showcasing the military's capability to have a computer program perform one of the most difficult tasks that a pilot is asked to do.

The landing of the X-47B experimental aircraft means the Navy can move forward with its plans to develop another unmanned aircraft that will join the fleet alongside traditional airplanes to provide around-the-clock surveillance while also possessing a strike capability. It also would pave the way for the U.S. to launch unmanned aircraft without the need to obtain permission from other countries to use their bases.

"It is not often that you get a chance to see the future, but that's what we got to do today. This is an amazing day for aviation in general and for naval aviation in particular," Navy Secretary Ray Mabus said after watching the landing.

The X-47B experimental aircraft took off from Naval Air Station Patuxent River in Maryland before approaching the USS George H.W. Bush, which was operating about 70 miles off the coast of Virginia. The tail-less drone landed by deploying a hook that caught a wire aboard the ship and brought it to a quick stop, just like normal fighter jets do. The maneuver is known as an arrested landing and had previously only been done by the drone on land at Patuxent River. Landing on a ship that is constantly moving while navigating through turbulent air behind the aircraft carrier is seen as a more difficult maneuver, even on a clear day with low winds like Wednesday.

Rear Adm. Mat Winter, the Navy's program executive officer for unmanned aviation and strike weapons, said everything about the flight — including where on the flight deck the plane would first touch and how many feet its hook would bounce — appeared to go exactly as planned.

Less than an hour after that first landing, the jet took off from the carrier and then landed again. On its third and last-planned landing attempt, the Navy said, the jet self-detected a navigation computer anomaly. Instead of landing on the carrier, it flew to Wallops Island Air Field on the Eastern Shore of Virginia. The Navy says the plane landed safely there.

The Navy will do some additional tests and analysis on the jet, and possibly some more landings in the next few days if the carrier's schedule allows for it, but the first landing was the last major benchmark for the program to hit.

The X-47B will never be put into operational use, but it will help Navy officials develop future carrier-based drones. Those drones could begin operating by 2020, according to Winter. Four companies are expected to compete for a contract to design the future unmanned aircraft, which will be awarded in fiscal year 2014.

The two experimental aircraft that have been built for the first round of testing will be retired and placed in museums at Patuxent River and at Naval Air Station Pensacola in Florida.

The move to expand the capabilities of the nation's drones comes amid growing criticism of America's use of Predators and Reapers to gather intelligence and carry out lethal missile attacks against terrorists in Iraq, Afghanistan, Pakistan and Yemen.

Critics in the U.S. and abroad have charged that drone strikes cause widespread civilian deaths and are conducted with inadequate oversight. Still, defense analysts say drones are the future of warfare.

The X-47B is far bigger than the Predator, has three times the range and can be programmed to carry out missions with no human intervention, the Navy said.

While the X-47B isn't a stealth aircraft, it was designed with the low profile of one. That will help in the development of future stealth drones, which would be valuable as the military changes its focus from the Middle East to the Pacific, where a number of countries' air defenses are a lot stronger than Afghanistan's.

While Predators are typically piloted via remote control by someone in the U.S., the X-47B relies only on computer programs to tell it where to fly unless a human operator needs to step in. The Navy says the aircraft relies on precision GPS navigation, a high-integrity network connection and advanced flight control software to guide itself.

Developed by Northrop Grumman under a 2007 contract at a cost of $1.4 billion, the X-47B is capable of carrying weapons and is designed to be the forerunner for a drone program that will provide around-the-clock intelligence, surveillance and targeting, according to the Navy, which has been giving updates on the project over the past few years.

The X-47B can reach an altitude of more than 40,000 feet and has a range of more than 2,100 nautical miles, versus 675 for the Predator. The Navy plans to show the drone can be refueled in flight, which would give it even greater range.

"It gives us persistence. It gives us the ability to do things that we can't today because of the limitations on the human body in terms of endurance, in terms of distance, in terms of just how long you can stay on station or do the things like refueling," Mabus said. "We're not sending this message to any particular country. This is for us. This is to make sure that we keep the technological edge."