Lawyer Behind Pop-Tart Suit Has Filed More Than 400 Lawsuits

He has created a historic spike in class action lawsuits, which are up more than 1,000% since 2008.

Last week, Kellogg was hit with a $5 million lawsuit for "false, misleading and deceptive" marketing. The lawsuit says Frosted Strawberry Pop-Tarts don't have strawberries in them even though the product's ingredients list says the popular pastries contain "2% or less of dried strawberries, dried pears and dried apples.”

While food labeling lawsuits are hot right now, many of them can be traced back to one man, Spencer Sheehan, a New York lawyer who has filed more than 400 lawsuits, many against food and beverage manufacturers.

According to NPR, Sheehan has almost single-handedly created a historic spike in class action lawsuits, which are up more than 1,000% since 2008.

Sheehan went after Ferrara because Keebler Fudge Stripes cookies weren't made with real fudge. He did the same to General Mills for Betty Crocker Fudge Brownie Mix.

The lawyer is averaging about three new lawsuits a week, also targeting Frito-Lay's Hint-of-Lime Tostitos for prominently showing limes on the packaging while carefully tucking "flavored tortilla chips" in the bottom corner of the bag.

He went after Conagra because Snack Pack pudding says it's "Made with Real Milk," when it's actually made with skim or "nonfat milk," which, by definition, is not milk. He also sued Krispy Kreme for making similar fruit-filling claims that have Kellogg in a clinch.

He says his most successful case was against A&W root beer. The popular beverage boasted of using aged vanilla in the recipe, but it turns out that it was a synthetic vanilla flavoring. A&W changed its packaging.

Sheehan says he's motivated by challenging companies that cheat consumers over small amounts, and advocates, like Truth in Advertising, have praised Sheehan's work. While the lawyer hopes to press food manufacturers into more truthful labeling, his firm could see a windfall for his efforts, earning between 25% to 33% of the settlement or award in each case. 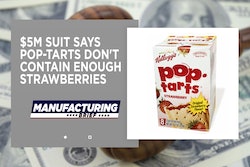