The first fire was blamed on a "mechanical error."

A fire was reported on October 31st at Blue Ridge Fiberboard in Denville, Virginia.

According to reports, this is the third fire that’s erupted at this same plant in a two-week period.

Factory employees were said to be already fighting the fire when responders arrived.

Local station ABC 13 says firefighters pulled several manufacturing lines when they arrived, in an effort to control the spread.

They are claiming the fire resulted from built-up heat from the manufacturing process.

The first fire, on October 17th, was blamed on a “mechanical error” described as “oil leaking from a large asphalt boiler.”

Like the third fire, the second fire, which occurred on October 24th, was deemed the result of heat build-up from manufacturing.

No injuries have been reported in any of the fires, though some have caused significant property damage. 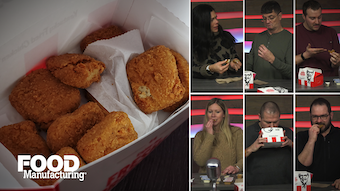 We scored some nuggets the day they debuted to see if they truly were a "Kentucky Fried Miracle."
Jan 13th, 2022