Warren Buffett and a fellow billionaire are teaming up to snap up the Heinz ketchup company, marking the food industry's biggest ever deal and yet another sign that the lifeless merger market is finally picking up. H.J. Heinz announced Thursday a $23.3 billion deal to be purchased by Buffet's Berkshire Hathaway and 3G Capital, which was co-founded by Jorge Lemann, one of Brazil's richest men. 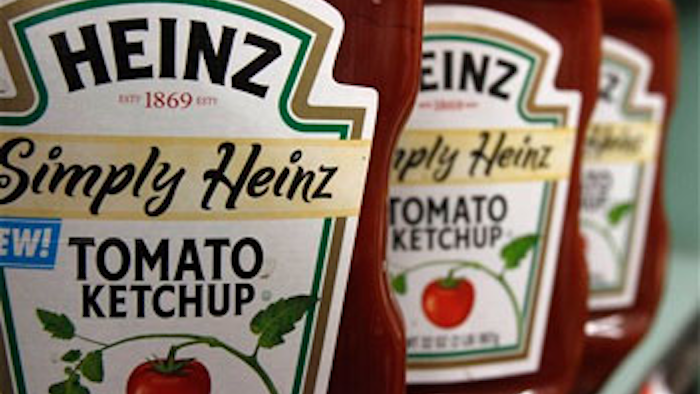 NEW YORK (AP) — Warren Buffett and a fellow billionaire are teaming up to snap up the Heinz ketchup company, marking the food industry's biggest ever deal and yet another sign that the lifeless merger market is finally picking up.

H.J. Heinz announced Thursday a $23.3 billion deal to be purchased by Buffet's Berkshire Hathaway and 3G Capital, which was co-founded by Jorge Lemann, one of Brazil's richest men. The news came the same day that American Airlines and U.S. Airways announced their $11 billion merger. Just a little over a week ago, Michael Dell said he struck a deal to buy the computer company that he founded and bears his name.

Even before Thursday's blockbuster deals were announced, the year had been shaping up to be a promising one for mergers. U.S. mergers total $219 billion year-to-date, which is the fastest start to a year since 2000, according to Dealogic. At the same time last year, mergers had totaled just $85 billion.

Globally, merger activity has been tepid since 2007 when there were $4.6 trillion in deals. Last year's total was $2.7 trillion.

One of the reasons activity is picking up is that financing deals is cheap, with interest rates near record lows. Companies are also sitting on piles of cash, with those in the Standard and Poor's 500 index holding nearly $1 trillion on their books.

Another reason to buy? After years of slashing expenses and squeezing more work out of remaining staff, companies are struggling to grow earnings. In the January-March quarter, earnings are expected to climb less than 1 percent compared with the year earlier, according to FactSet, a financial data provider.

As for Heinz, the company says its sale to Berkshire and 3G is intended to help accelerate its transformation into a global powerhouse. The company, based in Pittsburgh, also makes Classico pasta sauces and Ore-Ida potatoes, as well as a growing stable of sauces suited to local tastes around the world.

For his money, the Oracle of Omaha gets one of the nation's oldest and most familiar brands, one that's in refrigerators and kitchen cupboards all over the U.S.

The deal, expected to close in the third quarter, sent shares of Heinz soaring. The company's stock price was up nearly 20 percent at $72.45 in afternoon trading on the New York Stock Exchange.

The plans to take Heinz private apparently began to take shape on a plane in early December. In an interview with CNBC, Buffett said he was approached at that time by Jorge Lemann, a fellow billionaire and a co-founder of 3G. The two had known each other since serving on the board of Gillette about 12 years ago.

Soon after that encounter, two of 3G's managing partners traveled to Pittsburgh to have lunch with Heinz CEO William Johnson and raise the prospect of buying the 144-year-old company.

"The offer was such that I simply felt compelled to take it to my board," Johnson said at a news conference Thursday after the deal was announced.

Over the next several weeks, Johnson said, the board worked out details of the transaction.

Berkshire is putting up $12.12 billion in return for half of the equity in Heinz, as well as $8 billion of preferred shares that pay 9 percent, according to a filing with the Securities and Exchange Commission. 3G Capital will run Heinz, and Berkshire will be the financing partner.

By taking the company private, Johnson said, Heinz will have the flexibility to react more quickly without the pressure of satisfying investors with quarterly earnings reports.

Heinz is increasingly focusing on emerging markets, where it expects to get about a quarter of its sales this year. Like other packaged food companies, it is betting that staking an early claim in countries with multiplying ranks of middle-class customers will secure its own future.

Although ketchup and sauces still account for just under half its sales, Heinz has expanded over the years to include a much broader array of products across 200 countries, including ABC soy sauce in Indonesia, Quero tomato sauces and vegetables in Brazil and Complan nutritional drinks in India. In 2010, the company bought Foodstar, which makes Master brand soy sauce and fermented bean curd in China.

The ever-expanding business reaches back to 1869, when Henry John Heinz and neighbor L. Clarence Noble began selling grated horseradish, bottled in a clear glass to showcase its purity. It wasn't until 1876 that the company introduced its flagship product, marking the country's first commercial ketchup.

Heinz is a prize because it has the type of name recognition that takes years to build, said Brian Sozzi, chief equities analyst for NBG Productions. One testament to the strength of the brand has been the company's ability to raise prices even in the competitive market, he said.

"There isn't going to be another Heinz brand," Sozzi said.

Johnson stressed that Heinz would remain in its native Pittsburgh as a condition of the agreement with 3G and Berkshire Hathaway. The only change will be when Heinz no longer appears in stock listings.

Although 3G Capital has a record of aggressively cutting costs at businesses it acquires, managing partner Alex Behring said Heinz is different because the business is healthy and sales are rising. But it wasn't a guarantee that jobs won't be cut.

The more Heinz is able to grow, the "safer people will be," said Johnson, who has been CEO for 15 years.

As for management changes, including his own tenure, Johnson said there have not yet been any discussions.

Buffett did not immediately respond to a message Thursday from The Associated Press. But he has recently said that he's been hunting for elephant-sized deals. At the end of last year, he said on CNBC that he had about $47 billion in cash available.

Berkshire's biggest acquisition ever was its $26.3 billion purchase of BNSF railroad in 2010.

Last year, Buffett also starting building a newspaper company with the $149 million acquisition of 63 Media General newspapers and several other small or mid-sized newspapers. Berkshire now owns 28 dailies and a number of other publications.

The Heinz deal is a departure for Berkshire Hathaway. Generally, Buffett prefers to buy entire companies and then allow the businesses to continue operating much the way they were before. Berkshire has also helped finance deals before — most recently during the financial crisis of 2008, when he made lucrative deals for Berkshire when few other companies had cash.

Heinz shareholders will receive $72.50 in cash for each share of common stock they own. Based on Heinz's number of shares outstanding, the deal is worth $23.3 billion excluding debt. Including debt, it's worth about $28 billion.

The price for the deal represents a 20 percent premium to Heinz's closing price of $60.48 on Wednesday. Heinz said the deal was unanimously approved by its board.

"It's our kind of company," Buffett said in the CNBC interview, noting Heinz's signature ketchup has been around for more than a century. "I've sampled it many times."