A new federal lawsuit is challenging Seattle's adoption of the nation's highest minimum wage as unfair to small franchises. 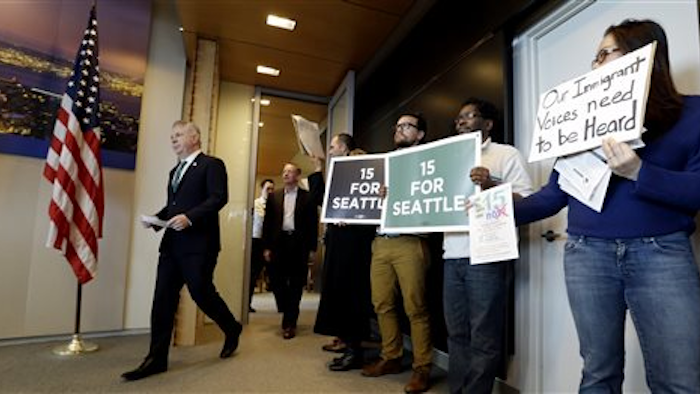 SEATTLE (AP) -- A federal lawsuit filed Wednesday challenges Seattle's adoption of what would be the nation's highest minimum wage as unfair to small franchises.

The Seattle City Council voted unanimously this month to gradually raise the minimum wage to $15 an hour. The plan gives businesses with more than 500 employees nationally at least three years to phase in the increase — four if they provide health insurance. Smaller employers get seven years.

In a lawsuit filed in U.S. District Court in Seattle, the International Franchise Association, a Washington, D.C.-based business group, said the ordinance "unfairly and irrationally discriminates against interstate commerce generally, and small businesses that operate under the franchise business model specifically."

For example, an independently owned Holiday Inn Express in Seattle with 28 workers is considered a "large" business under the law, because Holiday Inn franchises nationally have more than 500 workers, the lawsuit argues. Meanwhile, other Seattle companies with up to 500 workers are considered "small" and given extra time to adopt the wage.

"The ordinance will impose significantly higher labor costs on small franchisees than on their non-franchised competitors," it said. "It is foreseeable that some small franchisees in Seattle will not survive this prolonged period of unfair competition."

Members of the City Council and the City Attorney's Office did not immediately respond to requests for comment, while a spokesman for Mayor Ed Murray said his office was preparing a statement.

The complaint, signed by former U.S. Solicitor General Paul Clement, alleges a slew of legal shortcomings with the minimum wage measure, from incompatibility with federal trademark law to violations of the state and federal constitutions.

—By increasing the costs for franchises associated with out-of-state companies, the law discourages those companies from doing business in Seattle, thus violating the commerce clause of the U.S. Constitution, which reserves for Congress the regulation of interstate commerce.

—By treating independently owned franchises differently from local companies of similar size, the law violates the rights of the franchises to equal treatment under the law.

—By imposing higher costs on franchises, the law makes it difficult for the out-of-state companies that own the franchise trademarks to maintain the quality of those trademarks, in violation of federal law.

Seattle's decision to raise the minimum wage was kick-started by last fall's election of Socialist City Councilwoman Kshama Sawant, who had called for a raise to $15 an hour to improve the plight of low-income workers. Supporters have celebrated their victory this month by calling for a national movement to close income and opportunity gaps between rich and poor.

San Francisco has the nation's highest hourly minimum wage at $10.74. Voters there will decide in November whether to raise the city's minimum wage to $15 an hour in 2018.

The minimum wage in Washington state is $9.32 an hour.

Earlier this year, Minnesota raised the state's guaranteed wage by more than $3, to $9.50, by 2016. California, Connecticut and Maryland also have passed laws increasing their respective wages to $10 or more in coming years.