Confident House Republicans pressed ahead with a $1.1 trillion government-wide spending bill Thursday despite persistent grumbling among Democrats whose votes they need for passage, and lingering opposition from tea party Republicans who see more in the measure to dislike than... 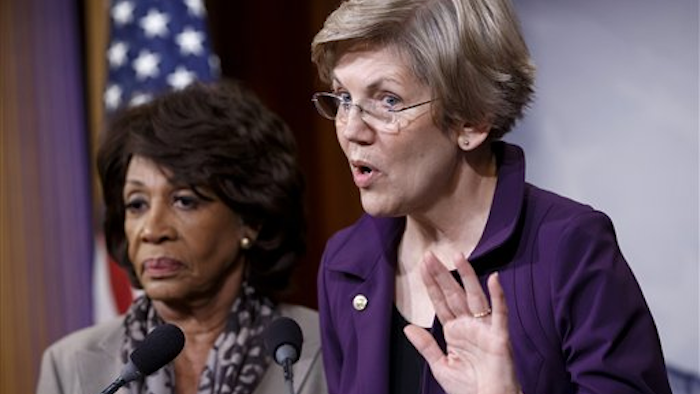 Confident House Republicans pressed ahead with a $1.1 trillion government-wide spending bill Thursday despite persistent grumbling among Democrats whose votes they need for passage, and lingering opposition from tea party Republicans who see more in the measure to dislike than like.

With lawmakers facing a midnight Thursday deadline to prevent a government shutdown, Congress was expected to pass a measure to keep the government running for two days. The aim is to approve the longer-term bill before adjourning Friday, though that could slip into the weekend.

Two items are particularly toxic to Democrats whose votes will be needed to pass the measure, neither of which was disclosed until late in this week's negotiations on the bill. One would weaken the regulation of risky financial instruments and another would allow rich people to flood political parties with more cash.

A provision aimed at shoring up financially weak multiemployer pension fund was drawing fire from AARP and some union allies of Democrats over a major change in labor law that would permit plans to cut the pensions of current retirees.

Many Democrats tended to focus more on the bad than the good since the 1,603-page bill was released late Tuesday. Large swaths of Republicans praised it for cutting spending for the IRS and the Environmental Protection Agency.

But Democrats won victories, too, and the alternative option is to boot the unfinished spending bills into next year, when Republicans will have retaken the Senate and bolstered their numbers in the House. Republicans were cautiously confident that they would get the Democratic votes they need to pass the bill.

"This may be a 'hold your nose' vote," said Rep. Gerry Connolly, D-Va. "Do you really think next year, with Republicans entirely in control, that it would actually get better?"

The underlying measure funds the day-to-day operations of every agency of government in a year in which such so-called discretionary spending has been frozen at current levels for both domestic agencies and the Pentagon. It's the biggest remaining item on the agenda of a lame-duck Congress that hopes to adjourn by week's end. A vote in the House is set for Thursday and then it would go to the Senate for consideration.

Sen. Elizabeth Warren, D-Mass., a favorite of liberals and a new member of Senate Majority Leader Harry Reid's leadership team, promptly broke with him and railed against the measure over a provision eroding the 2010 Dodd-Frank overhaul of Wall Street regulations. Critics say it is aimed at boosting the bottom lines of a handful of big banks.

Specifically, the provision significantly weakens new regulations that require banks to set up separate affiliates to deal in the more exotic and riskier forms of complex financial instruments called swaps. Bringing swaps trading back into the banks would expose taxpayers to greater risk of a repeat of the 2008 bank bailout.

"The American people did not send us here to work for Wall Street banks," Warren said.

Warren's opposition has put Reid, who helped negotiate the measure, into a tough spot. House Democratic leader Nancy Pelosi, D-Calif., was in a bind as well. Liberals in her caucus erupted with complaints, and support for the bill slipped as more details poured out. But 70 House Democrats voted for the bill last year, including Democratic Whip Steny Hoyer of Maryland.

And killing the bill would mean Democrats would lose hard-fought budget increases for the Securities and Exchange Commission and the Commodity Futures Trading Commission, as well as boosts for NASA and health research. Many of the Democratic victories in the negotiations involved dumping overboard controversial GOP policy "riders" on the environment, gun rights, abortion and new regulations on selling items made with ivory. If the measure fails, those fights would have to be relitigated next in a Capitol in which Democrats would hold far less power — though Obama would provide a powerful backstop with his veto pen.

The campaign finance changes would sharply increase the amount an individual may contribute to various national political party accounts annually, from $32,400 to $324,000 for national conventions, election recounts and headquarters buildings.

Outside groups across the political spectrum — including the Heritage Foundation, the AFL-CIO and the powerful AARP, with a membership of millions of seniors — called for defeat of the spending measure.

AARP objected to a bipartisan agreement — a Democratic priority — that will permit reductions in benefits for current retirees at multiemployer pension funds in extreme financial distress.

Conservatives were angry, too, pressing to use the measure to block Obama from giving deportation protections to nearly 5 million immigrants living here illegally and allowing them to gain work papers and eventually qualify for Social Security and Medicare.