Look past the booming November job gain of 321,000 reported Friday — the best figure in three years in the strongest year for U.S. hiring since 1999. The job market has reached a new milestone on its road to full health: For the first time since the Great Recession ended.... 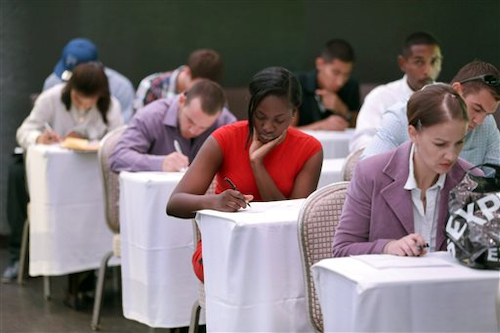 Look past the booming November job gain of 321,000 reported Friday — the best figure in three years in the strongest year for U.S. hiring since 1999.

The job market has reached a new milestone on its road to full health: For the first time since the Great Recession ended 5½ years ago, America's unemployed are now as likely to be hired as to stop looking for a job.

It means that employers have grown confident enough to fill more job vacancies. And it means the unemployed are now less likely to succumb to frustration.

The hiring surge owes much to solid consumer spending — on items like cars, electronics and restaurant meals. That, in turn, has given businesses the means to step up investment in machinery, computers and facilities. Thanks to such spending, the economy grew at a 4.3 percent annual pace from April through September — the healthiest six-month spurt since 2003. Employers have responded by adding a robust average of 241,000 jobs a month this year.

For each month, the government estimates the proportion of the unemployed who found work and the proportion who stopped looking. In November, 23 percent of people who were out of work the previous month found jobs, and the same percentage gave up looking. (The figures are three-month averages, intended to smooth out volatility.)

The increase marks the first such sustained improvement since the recession ended. This year's acceleration in hiring has been potent enough to finally soak up a significant proportion of the jobless. During the first four years of the recovery, businesses had hired at a rate that was merely enough to keep up with population growth.

The brightening picture has been a relief for people like Kersten Higgins, who had begun job hunting in July after graduating from law school. She didn't get a single interview until November, when she got four.

Two of the interviews produced offers. She's accepted a position at Mutual of Omaha, where she will help ensure that its insurance policies comply with federal rules. Higgins, 26, who lives in Omaha, Nebraska, starts Monday.

"I feel great," Higgins said. "This definitely fits into the category of jobs I hoped to get coming out of law school."

At the same time, the government's jobs figures illustrate how much improvement is still needed. Before the recession began in 2007, the unemployed were more likely to find work than to stop looking in every month dating to when record-keeping began in 1990. Since the recession ended, that's been true for only three months out of 65.

One sour note amid the improving outlook for the unemployed: The jobless are likelier now than before the recession to land only part-time work. Though the economy has regained all the jobs lost to the recession, there are still nearly 2 million fewer people with full-time work.

In other cases, the jobs the formerly unemployed have now pay less than those they had before.

One reason the unemployment rate declined early in the recovery was that hundreds of thousands of people grew frustrated with their job hunts and stopped looking. Once people stop looking for a job, they're no longer counted as unemployed. At that point, the unemployment rate can fall even if hiring is weak. But now, the number of such dropouts has plateaued.

The figures that show the unemployed are now as likely to get a job as to stop seeking one mean that fewer will end up jobless for prolonged periods. Research has shown that the longer people are unemployed, the more reluctant employers are to hire them.

"This is one of the most important indicators, because if this rate doesn't pick up, then long-term unemployment persists," said Aysegul Sahin, vice president for research at the Federal Reserve Bank of New York.

Companies are advertising the most jobs in nearly 14 years. And more Americans are quitting their jobs for better opportunities. That provides openings for others.

Employers hired just over 5 million people in September, the most in nearly seven years. That figure reflects total hiring. By contrast, November's 321,000 job gain is a net figure: Total hiring minus layoffs, quits and retirements.

Early in the recovery, each month's net job gain was driven more by fewer layoffs than by more hiring. That helped explain why the unemployed had such trouble finding work.

Landing a job remains much easier for those who have been unemployed only briefly. For those out of work for six months or less, 31 percent found jobs in October. For those unemployed for more than six months, the rate was just 14 percent.

"The long-term unemployed are still being left behind," said Claire McKenna, a policy analyst at the National Employment Law Project.

But there are signs of hope even for the long-term unemployed. Their prospects of finding a job over the course of a year are nearing pre-recession levels, according to research by the New York Fed.

Marcia Hauler of Atlanta began a job last month after eight months of searching. She took a position as an account executive with Concur Technologies, which manages businesses' expenses.

Her job search was a frustrating one: She had numerous interviews, including six with one company that ended up not hiring her.

But "toward the end of the summer, it seems like there were more jobs available," she said. "My story has a happy ending."