Carl Reavey plunged his nose into the glass, inhaled the amber liquid's scent, then sipped. Slowly. It's said that Scotch tastes of the place where it is made, so Reavey's ... 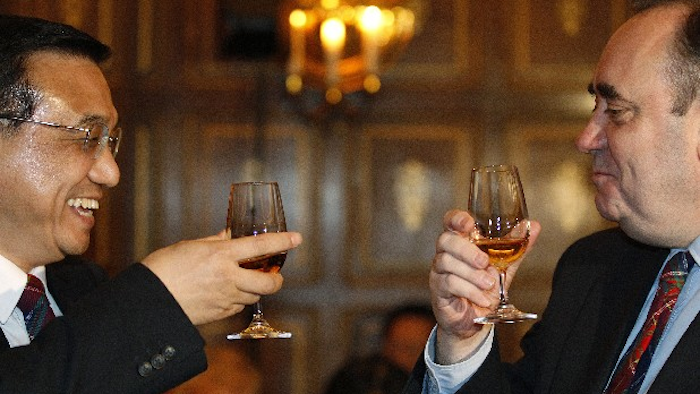 Carl Reavey plunged his nose into the glass, inhaled the amber liquid's scent, then sipped. Slowly.

It's said that Scotch tastes of the place where it is made, so Reavey's Bruichladdich Black Art single malt would offer a touch of barley, a splash of the sea, and a whiff of salt from the island of Islay, 140 miles (225 kilometers) west of Glasgow.

That taste takes time — a long time — to produce, with top-rated Scotch aged for decades. And it means distilleries need to have long-term plans for investments and financing — all of which could be thrown into turmoil in a single day, Sept. 18, when Scotland votes on whether to leave Britain.

Whisky makers and many other businesses are worried about the risks involved in finding themselves overnight in a new country with, among other things, a different currency.

"The uncertainty associated with independence, rather than independence itself, really, I think is the concern," Reavey said.

The most contentious issue so far has been what currency an independent Scotland would use. The central government has ruled out sharing the pound, saying British taxpayers shouldn't be forced to underwrite economic and fiscal policies over which they have no control. Pro-independence leader Alex Salmond has refused to offer a plan B, arguing that the stance of the unity advocates is merely a scare tactic.

For many companies, that's not a bluff worth calling.

If Scotland were to take a new currency, businesses would suddenly find themselves in the position of having to pay back loans they took in pounds with new money of uncertain value. The risk is a new currency would be weaker than the pound because it would be based on an economy, Scotland's, which is smaller than the rest of Britain, which includes England, Wales and Northern Ireland.

The currency debate is especially important to Scotland's financial services industry, which accounts for 25 percent of the region's economy, excluding oil and gas. Scotland-based groups such as the Royal Bank of Scotland and Standard Life, which rely on the stability provided by the pound, have warned about the potential risks of independence.

Part of that would come from the fact that an independent Scotland may be forced to drop out of the European Union and have to reapply for membership. The union of 28 countries guarantees free movement of money and people — a precious asset for companies, particularly multinational corporations, as well as exporters.

Nine out of 10 bottles of Scotch are sold overseas for a value of 4.3 billion pounds ($7.1 billion) a year. Being outside the EU would raise the prospect of new export duties to the EU, the world's largest trading bloc with over 500 million people. Many distilleries import grain from EU countries to make whisky, something that could become more expensive. Scotland would also have to take on the job of shielding the drink from unfair trading practices, protect its trademarks and safeguard an estimated 35,000 jobs

The broad-ranging uncertainty is the primary weapon of anti-independence campaigners. The key question for voters — not just business owners — is whether Scots would be economically better off if they severed ties with Britain.

Salmond says Scotland will grow rich from its North Sea oil reserves once it is free of meddling politicians in London who have wasted the country's energy wealth. Salmond wants to funnel a portion of that revenue into a special fund like the one in Norway, which has set aside the equivalent of $883 billion for future generations.

"We're not saying that the day after independence we'll all wake up and find there are three taps in every house - whisky, oil and water. We're not saying that," Salmond told The Associated Press. "We're saying if we work together over a period of time, we can build a more prosperous and a more just society."

Alistair Darling, who leads the Better Together campaign, argues that prosperity is best guaranteed by Scotland remaining an integral part of Britain. Darling, who was British Treasury chief at the onset of the 2008 financial crisis, underscores that North Sea oil production is already declining and future revenue is uncertain. He has portrayed the nationalists as deceptive, arguing for example that a 650-page report explaining the nationalists' plans lacks heft — offering more mentions of the celebrity television show "Strictly Come Dancing" than of the whisky industry.

One independent analysis suggests advocates of secession may have overestimated Scotland's energy windfall.

Some 84 percent of British oil reserves are in Scottish waters, meaning an independent Scotland would receive the lion's share of future tax revenue from those assets. That translates to about 7 billion pounds ($11.6 billion) a year based on government forecasts, according to the London-based National Institute for Economic and Social Research. However, an independent state would lose roughly the same amount in transfer payments that the central British government now sends to Scotland, the institute said in a February report.

With North Sea oil production likely to decline beginning in 2018, Scotland may actually be left with a shortfall that would require it to find new sources of revenue to maintain public spending, according to the report.

Whisky differs from oil in that it is not only a source of money and jobs, but has become one of the most pervasive and recognizable symbols for Scotland internationally.

The drink, which has been distilled in Scotland since at least 1494, was popularized globally by Hollywood after World War II. The promotion of single malt whisky added another dimension to the market, which exploded in terms of sales in the last decade.

"You're buying a very carefully made and complex product," said Charles MacLean, a leading expert on Scotland's whisky industry. "You're buying the blood of one small nation."

The members of the Scotch Whisky Association are clear — they will work with whoever is in power. But who will that be?

"If there's one certainty of this process, (it's) that Scotch whisky will still be made in Scotland whatever happens," said David Williams, the association's spokesman.