State and local officials promised an Egyptian company $200 million in tax breaks to build a fertilizer plant in southeast Iowa without knowledge of a pending lawsuit alleging one of the company's subsidiaries defrauded U.S. taxpayers out of millions of dollars, officials told The Associated Press. 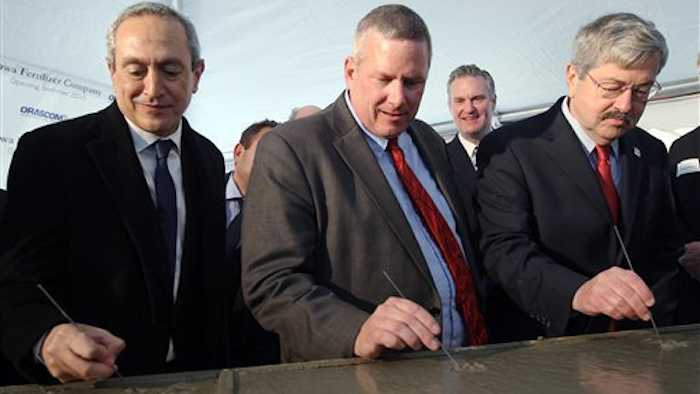 IOWA CITY, Iowa (AP) -- State and local officials promised an Egyptian company $200 million in tax breaks to build a fertilizer plant in southeast Iowa without knowledge of a pending lawsuit alleging one of the company's subsidiaries defrauded U.S. taxpayers out of millions of dollars, officials told The Associated Press.

The Iowa Economic Development Authority and Lee County approved the incentives for a subsidiary of Cairo-based Orascom Construction Industries, which is planning to invest $1.4 billion to build the plant near Burlington. Their failure to uncover the lawsuit — disclosed by Orascom in its annual report — raises questions about the research that went into the deal, which has been criticized as rushed and overly generous.

Orascom didn't tell Iowa officials — and were not required to — that it is contesting a lawsuit filed by the federal government in 2004 alleging its subsidiary, Virginia-based Contrack International, was part of a joint venture that improperly won $332 million in U.S.-financed construction contracts in Egypt, officials said.

The state's vetting also did not uncover the lawsuit, which seeks to recover funds spent by the U.S. Agency for International Development, Authority Director Debi Durham told the AP.

"It did not come up in our due diligence," she said. "But you're talking about a global corporation that has numerous subsidiaries. I'm not sure how anyone would have found that."

Orascom had disclosed the lawsuit previously, saying it owns 40 percent of a venture being sued by the United States, according to copies of its annual reports reviewed by AP. Orascom says it has "strong substantive reasons" to deny the allegations, and that any resolution shouldn't significantly impact its financial statements.

Democrats have accused Republican Gov. Terry Branstad of approving too much aid for Orascom, which is managed by Egyptian billionaire Nassef Sawiris and is one of the largest employers in the Middle East. One lawmaker calls it the worst economic development deal in Iowa history. Supporters say it will create desperately needed jobs and cut the price of fertilizer for farmers.

The lawsuit alleges Contrack and two other companies collaborated to win USAID-financed contracts to build Egyptian infrastructure for which they should have been ineligible. They formed a secret, joint venture to conceal that one of the partners was an Egyptian company, the lawsuit alleges, because only U.S. contractors were eligible.

Sawiris, the Orascom CEO who recently appeared with Branstad at the plant's groundbreaking, was designated as Contrack's representative on the venture's executive committee, records show. He has not been personally accused of wrongdoing. Some employees working on the Iowa project are employed by Contrack.

"It is unbelievable the Branstad administration did not fully vet Orascom and gave over $100 million in taxpayer money without knowing this information," Iowa Democratic Party Chairman Tyler Olson said Thursday.

Durham said Orascom's performance would be closely monitored, noting Iowa could revoke incentives if it fails to build the plant or hire workers as promised. She said she didn't consider the federal allegations important and critics were "pulling at straws" if they claim otherwise.

"Until it is proven significant, we're not going to overreact," she said.

Sue Johnson, a neighbor fighting the proposed plant, said the lawsuit raises more questions about why Iowans are subsidizing a large foreign company. She said the deal appears to have been approved with little scrutiny of Orascom or the plant's environmental impact.

The plant would employ 165 workers and support more than 2,000 temporary construction jobs, backers say. Critics say the subsidies were too generous per job and wondered whether the project would've come to Iowa without them.

Branstad's administration promised tax credits worth more than $100 million as well as a $1.6 million loan. A state transportation commission agreed Tuesday to spend $5 million on improving the roads around the plant. Lee County waived the plant's property taxes for 20 years in lieu of payments totaling $16.5 million — an estimated $130 million break.

In addition, Orascom is borrowing $1.2 billion from a bond program created by Congress in 2008 to help the Midwest recover from floods and tornadoes — a subsidy that could shave $300 million off interest payments, said Sen. Joe Bolkcom, an Iowa City Democrat.

"This company is pushing, pushing, pushing and they have taken taxpayers to the cleaners," he said. Bolkcom said state officials conducted an "amateur hour" negotiation with Orascom, and should look into the lawsuit's allegations.

The government's lawsuit alleges that Contrack joined with Idaho-based Morrison Knudsen Corp. and an Egyptian company to bid starting in 1997 on work to construct water and wastewater infrastructure in Egyptian cities. Contrack and Morrison Knudsen told USAID they were the only team members, and kept the Egyptian company's involvement secret, the lawsuit alleges, submitting invoices that falsely attested all companies involved met the U.S. nationality requirements.

USAID's inspector general uncovered the suspected fraud in 2002. The lawsuit alleges they violated the False Claims Act and were unjustly enriched.

The case has been on hold during bankruptcy proceedings of Morrison Knudsen's successor, Washington Group International. A judge ruled last year that most of the government's claims could proceed, but WGI appealed. The lawsuit is expected to resume in federal court in Idaho once the appeal is resolved.