ISM: Manufacturing Searches For Direction In 2016 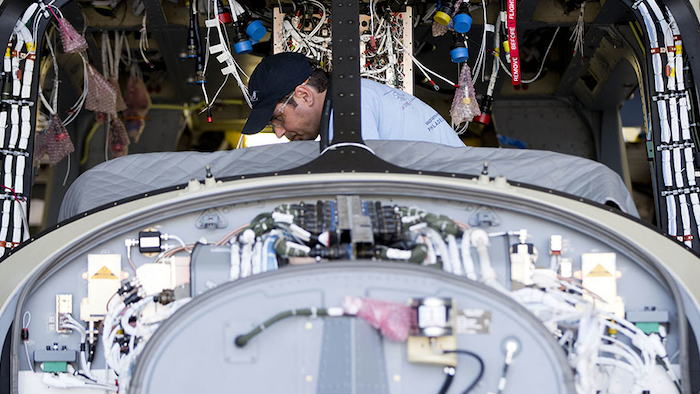 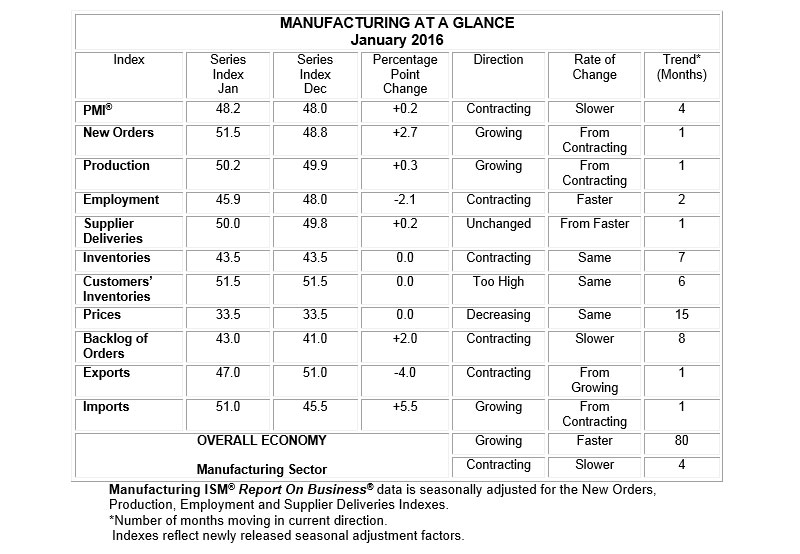 Bradley J. Holcomb, CPSM, CPSD, chair of the Institute for Supply Management Manufacturing Business Survey Committee states, “The past relationship between the PMI and the overall economy indicates that the PMI for January (48.2 percent) corresponds to a 1.6 percent increase in real gross domestic product (GDP) on an annualized basis.”

ISM’s New Orders Index registered 51.5 percent in January, an increase of 2.7 percentage points when compared to the seasonally adjusted December reading of 48.8 percent, indicating growth in new orders in January following two consecutive months of contraction in new orders. A New Orders Index above 52.2 percent, over time, is generally consistent with an increase in the Census Bureau’s series on manufacturing orders (in constant 2000 dollars).

ISM’s Production Index registered 50.2 percent in January, which is an increase of 0.3 percentage point when compared to the seasonally adjusted 49.9 percent reported for December, indicating growth in production in January following two consecutive months of contraction in production. An index above 51.3 percent, over time, is generally consistent with an increase in the Federal Reserve Board’s Industrial Production figures.

The Inventories Index registered 43.5 percent in January, the same reading as in December, indicating raw materials inventories are contracting in January for the seventh consecutive month. An Inventories Index greater than 42.8 percent, over time, is generally consistent with expansion in the Bureau of Economic Analysis (BEA) figures on overall manufacturing inventories (in chained 2000 dollars).

“We talked about this number last month as being a strategy to close the yearly books with lean inventories, as not to tie up as much cash,” explains Holcomb. “I think this is a continuation of that and sort of a ‘wait and see’ as far as direction, but if new orders and production continue growing, of course inventories have to follow to meet that demand. I would expect to see inventories coming up correspondingly over the next couple of months.”

ISM’s Backlog of Orders Index registered 43 percent in January, an increase of 2 percentage points as compared to the December reading of 41 percent, indicating contraction in order backlogs for the eighth consecutive month. Of the 88 percent of respondents who measure their backlog of orders, 17 percent reported greater backlogs, 31 percent reported smaller backlogs, and 52 percent reported no change from December.

ISM’s New Export Orders Index registered 47 percent in January, which is a decrease of 4 percentage points when compared to the December reading of 51 percent, and indicates contraction in the New Export Orders index.

“I think the Exports number in December was some pent up or catch up spending from our overseas buyers of finished goods and it’s back to contraction territory,” says Holcomb. “Exports had been under pressure for some months because of the high price of the dollar and somewhat weaker global demand. On the import side, kind of the reverse is true. The number reflects us importing more, well-priced raw materials and subassemblies to feed into manufacturing consistent with New Orders being up and Production being up.”

ISM’s Imports Index registered 51 percent in January, which is 5.5 percentage points higher than the 45.5 percent reported in December, and indicates growth in imports following three consecutive months of contraction.

The ISM Prices Index registered 33.5 percent in January, the same reading as in December, indicating a decrease in raw materials prices for the 15th consecutive month. In January, 5 percent of respondents reported paying higher prices, 38 percent reported paying lower prices, and 57 percent of supply executives reported paying the same prices as in December. A Prices Index above 52.4 percent, over time, is generally consistent with an increase in the Bureau of Labor Statistics (BLS) Producer Price Index for Intermediate Materials.

ISM’s Employment Index registered 45.9 percent in January, which is a decrease of 2.1 percentage points when compared to the seasonally adjusted 48 percent reported for December, indicating contraction in employment for the second consecutive month.

“I think the decrease in the index has a lot to do with temporary and part-time holiday employees being released at the end of the year,” adds Holcomb. “So I’m not at all concerned about it. We have pretty strong levels of employment throughout manufacturing for the most part and this is just more of an adjustment.”

An Employment Index above 50.6 percent, over time, is generally consistent with an increase in the Bureau of Labor Statistics (BLS) data on manufacturing employment.

“I think we’re trying to find a new direction here with New Orders up above 50 percentage points, but that has to keep going for us to get back on track with our forecast from December,” concludes Holcomb. “We’re going to take this month by month and really find the direction for manufacturing in 2016.”