The company was one of the highest-volume opioid producers in the U.S. at the height of the nation's prescription drug crisis. 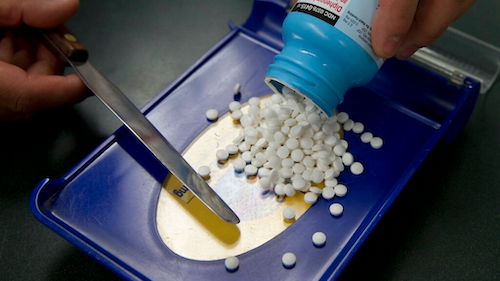 The generic drugmaker Mallinckrodt has a tentative $1.6 billion deal to settle lawsuits over its role in the U.S. opioid crisis, it announced Tuesday.

The company said that it had an agreement with a key committee of lawyers representing thousands of local governments suing various drug industry players over opioids — and that the deal has the support of the attorneys general of 47 states and territories.

The company, based in Staines-Upon-Thames, England, was one of the highest-volume opioid producers in the U.S. at the height of the nation's prescription drug crisis, shipping millions of doses to Florida, an epicenter of the black market opioid trade.

Under its agreement, Mallinckrodt is filing for bankruptcy. The plan calls for it to make payments for eight years after the company emerges from the protections. That route is similar to one that OxyContin maker Purdue Pharma is attempting to settle opioid claims against it.

Mallinckrodt's announcement comes weeks before a trial on the toll of opioids is scheduled to start in Central Islip, New York. The looming trial has been a factor in a ramped-up push for other drugmakers and distributors to settle, as well.