Faulty building materials helped spread a devastating fire at London's Grenfell Tower in 2017, turning the residential complex into a "flaming coffin" for the 72 people who died, according to a product liability suit filed Tuesday in the United States. 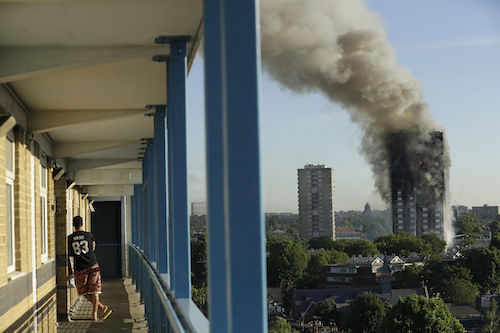 In this June 14, 2017, file photo, a resident in a nearby building watches smoke rise from a building on fire in London. Image credit: AP Photo/Matt Dunham, File

Faulty building materials helped spread a devastating fire at London's Grenfell Tower in 2017, turning the residential complex into a "flaming coffin" for the 72 people who died, according to a product liability suit filed Tuesday in the United States.

Nearly 250 survivors and families of victims joined the suit, which targets U.S. companies that made products used at the complex. The suit was filed in a state court in Philadelphia.

"This fire originated and spread because of decisions made in the United States by United States corporations that prioritized profits over safety," said attorney Robert Mongeluzzi, who is known for winning huge legal awards over deadly construction accidents.

The lawsuit does not seek specific monetary damages. It would be up to a jury to decide how much money to award. Mongeluzzi expects it to take more than two years for the case to go to trial.

The Grenfell blaze started two years ago June 14 in an apartment refrigerator and raced up the side of the 24-story residential building. The building's exterior cladding was made of highly flammable material that can't be used in U.S. skyscrapers, the plaintiffs' lawyers said. The insulation was similarly combustible, they said.

The suit accused Arconic of cutting corners by using a polyethylene product instead of a more expensive, fire-resistant material — sending the message that "foreign lives are worth less than American lives."

The insulation produced by Celotex released cyanide gas that killed several of the victims and caused lasting injuries in some of the survivors, according to another plaintiffs' lawyer, Jeffrey Goodman.

Both products have since been pulled from the market, the lawyers said.

"This fire spread with incredible speed, raced its way up the tower," Mongeluzzi said. "The problem with Celotex insulation and Arconic Reynobond PE cladding is they burn like gasoline. They didn't retard the flames, they accelerated the flames."

All three companies issued statements Tuesday extending sympathies to victims and pledging their cooperation with the public inquiry underway in London.

Whirlpool noted that two separate investigations have found no fault with the refrigerator model. Celotex said its insulation was just one element of the cladding system used on the tower. Arconic said it would respond in court.

The lead plaintiff in the suit is the estate of Gloria Trevisan, a 26-year-old architect who ended a phone call with her mother so her mother wouldn't hear her screams before she died. Trevisan died along with boyfriend Marco Gottardi, 27, who told his father in a call the stairwell was full of smoke, trapping them inside. The couple had moved into a top-floor apartment from Italy just two months before.

Also included among the plaintiffs are 177 survivors and relatives of 69 of the dead. Dozens of survivors suffered "life-altering physical, emotional and psychological injuries," the suit said.

The tower is in the North Kensington neighborhood, a working-class, multiethnic area next to some of the richest neighborhoods in Britain. Some observers asked whether hazards in the Grenfell complex, which had 120 apartments that housed as many as 600 people, were ignored because its residents were mainly poor.

A tenant group had complained for years about the risk of a fire in the building, owned by the local government in the borough of Kensington and Chelsea.

Some people jumped to their deaths rather than face the flames, and witnesses reported seeing small children thrown from the tower by their families in a desperate bid for survival.

The Metropolitan Police force has said it isn't likely to submit its files to prosecutors, to weigh potential criminal charges, until the latter part of 2021, after the public inquiry is completed. 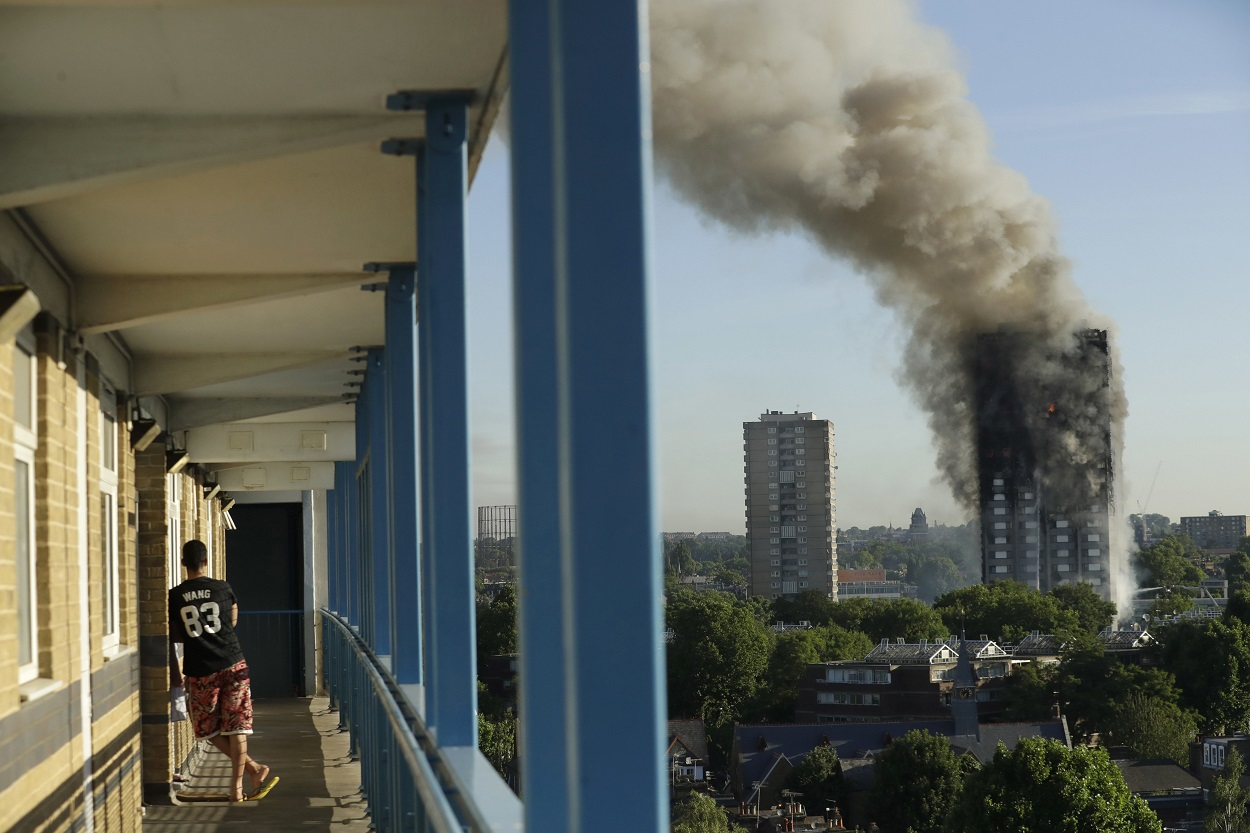 In this June 14, 2017, file photo, a resident in a nearby building watches smoke rise from a building on fire in London. Image credit: AP Photo/Matt Dunham, File
Latest in Safety