Flames Shot Out Of Grinder Before Wisconsin Plant Explosion 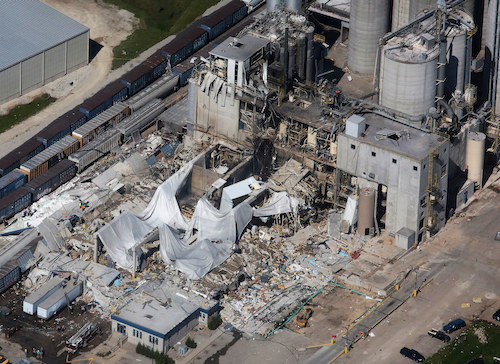 The May 31 blast at the Didion Milling Co. plant in Cambria killed five workers, injured 14 others and reduced the facility to rubble. The Occupational Safety and Health Administration said in November that an accumulation of highly combustible grain dust probably caused the explosion.

The U.S. Chemical Safety and Hazard Investigation Board is investigating the explosion as well with an eye toward improving safety measures for industries dealing with dust. Board investigators interviewed 10 of the survivors and released a report of their accounts during a news conference Monday in Madison.

According to the compilation, mill workers said they started smelling smoke about 15 to 30 minutes before the blast. Employees were inspecting the corn grinder as a possible source of the smoke when an air filter flew off the device, resulting in corn dust filling the air. Three-to-four foot flames began shooting from the air intake line.

A superintendent who isn't named in the report yelled for everyone to clear the room. He was about to sound an evacuation when the explosion occurred, the report said. A second explosion knocked him to the ground.

"You know, the building, as I was running, I was looking behind me and the whole building was just, there were fireballs and stuff," the superintendent told investigators. "It just kept exploding. Just sounded like thunder, like constant thunder. And I saw concrete and stuff blast. I just, I thought I was the only one that made it. I thought the whole place was done, you know."

The report notes that a dust cloud that catches fire within a confined space will expand until the enclosure bursts, releasing a pressure wave capable of damaging buildings and causing severe injuries.

A 2006 CSB study on dust fires identified 281 incidents between 1980 and 2005 that killed 119 workers and injured 718 others. Since 2006 the board has conducted five investigations into dust-related incidents that have killed 27 people and injured 61 others, including the Didion blast.

Monday's report didn't offer any conclusions about the cause of the explosion. Board investigators plan to use computer modeling to identify the amount of dust in the mill and are still examining the grinder as well as interviewing plant workers, the report said.

The CSB doesn't issue sanctions, instead focusing on how to improve industry safety.

OSHA, however, has cited Didion for 19 safety violations related to the explosion and proposed nearly $2 million in fines. Didion is contesting the citations before an administrative law judge in Washington, D.C.

Didion issued a statement Monday saying company officials were reviewing the CSB's report and have been cooperating with the board to determine the explosion's cause. Board Investigator Mary Beth Mulcahy, however, told reporters at the news conference that workers told investigators on Sunday evening that the company warned them not to speak with the CSB about the blast.

Didion spokeswoman Aisha Bachlani said in an email that the company has encouraged all employees to cooperate with CSB and any other agencies investigating the explosion. She added that the company as organized multiple CSB interviews with employees and given investigators regular access to the site.