Authorities said Friday they believe there's no further danger to the public in northwestern Wisconsin after an oil refinery explosion injured at least 13 people and sent billowing plumes of black smoke into the air. 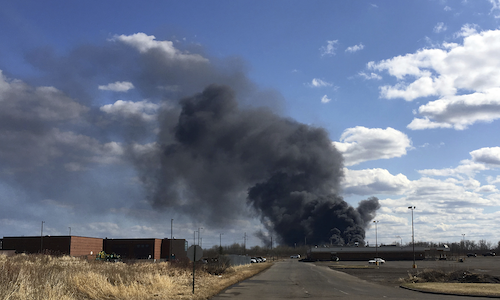 Authorities said Friday they believe there's no further danger to the public in northwestern Wisconsin after an oil refinery explosion injured at least 13 people and sent billowing plumes of black smoke into the air.

Superior Mayor Jim Paine said at a news conference that his community was getting back to normal after Thursday's explosion and fire at the Husky Energy refinery. Authorities lifted an evacuation for Superior order just before 6 a.m., allowing residents to return to their homes and jobs in the Lake Superior port city of 27,000 people.

"While yesterday was a very scary day, it had the potential to be absolutely catastrophic. And the difference between those two days is the hard work, skill and professionalism of hundreds and hundreds of people," Paine said. "The team that really managed this crisis had prepared for this for a long time, and when the crisis came they, kept a cool head, the acted with sound judgment and in many cases downright courage."

Air monitoring crews worked through the night and collected data that supported the decision to lift the evacuation order, said David Morrison, an on-scene coordinator from the U.S. Environmental Protection Agency, said

"We found consistent low trace levels, well below any health standards, virtually everywhere that we went for volatile chemicals, particulates and dust — the kinds of things that can adhere to smoke," Morrison said.

Refinery manager Kollin Schade said six injured workers were taken to hospitals and seven others were treated at the scene following Thursday's explosion. Two were hospitalized overnight but were expected to be released Friday, he said.

The Essentia Health system said that its hospitals and care centers in the area saw 16 patients as a result of the incident, including some refinery workers but also several residents who were treated and released for minor, evacuation-related injuries. A man who suffered a blast injury was upgraded to good condition.

Fire Chief Steve Panger said local authorities were still working with federal agencies to determine the cause of the explosion. He said the immediate area of the explosion and the ensuring asphalt fire remained "very hot" on Friday, and that fire crews on loan from nearby Duluth, Minnesota, were still mopping up.

The explosion happened about 10 a.m. Thursday at the refinery owned by Calgary, Alberta-based Husky Energy, prompting authorities to evacuate a 3-mile (5-kilometer) radius around the plant, as well as a sparsely populated 10-mile (16-kilometer) corridor south of it where the plume of smoke extended for miles.

Most of Superior was covered by the order. Paine acknowledged that one concern that led to the evacuation was the presence in the plant of hydrogen fluoride, a highly corrosive chemical that can produce toxic vapor clouds. It's used in about a third of the country's oil refineries to make high-octane gasoline.

Schade said the unit that uses the chemical was not damaged.