An explosion Tuesday at a major natural gas facility near Austria's border with Slovakia killed one person and left 21 others injured, and caused some gas flow disruptions to other countries, authorities said. 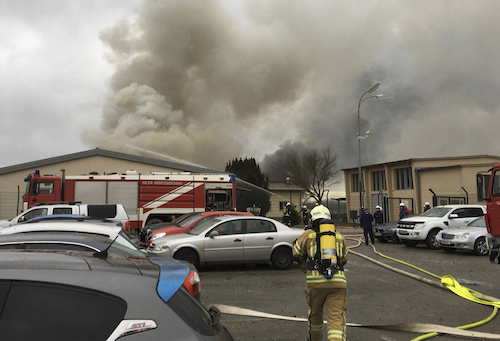 BERLIN — An explosion Tuesday at a major natural gas facility near Austria's border with Slovakia killed one person and left 21 others injured, and caused some gas flow disruptions to other countries, authorities said.

One person was seriously injured and 20 others were slightly hurt in the morning blast at the plant in Baumgarten an der March, east of Vienna, police said. No one was in a life-threatening condition. The facility's operator initially said all the casualties were Austrian, but later said the one with less severe injuries include employees of contractors from six other countries.

The explosion set off a fire, which operator Gas Connect said was completely extinguished by mid-afternoon. The facility was "shut down in a controlled state and is offline," the company said.

Police wrote on Twitter that the explosion was triggered by a "technical cause," but didn't elaborate and said that local authorities are investigating. Gas Connect said it also suspects an unspecified technical fault.

Gas Connect describes the Baumgarten plant, where pipelines bringing gas from Russia, Norway and other countries connect and gas is compressed and cooled, as one of Europe's most important gas supply hubs.

Officials and company experts are analyzing the situation at the facility and discussing the next steps, it said. The explosion affected a 100-meter by 100-meter (328-foot by 328-foot) area.

"Austria's natural gas supply can be covered for the foreseeable future," the company said on its website. However, "transit through Austria to the south and southeast regions is currently negatively impacted," it added.

Neighboring Italy's Economic Development Ministry declared an emergency after the explosion interrupted the flow of natural gas to the country, but said Italy's supply of gas would be ensured by existing stockpiles.

Claudio Descalzi, the CEO of Italian oil and gas company Eni, said that industry operators can compensate even if the interruption continues for weeks and aren't alarmed, although he said that if it continues for a prolonged period there could be an impact on prices.

Roadblocks on bridges and at expressway gates opened, allowing trucks and cars through for the first time in two months.
Joe McDonald
Mar 25th, 2020

One woman began organizing friends to make masks after learning her daughter, a nurse at a suburban Detroit hospital, was told to wear the same mask all day.
Dee-Ann Durbin
Anne D'Innocenzio
Mar 24th, 2020

The shoes are going to workers on the front lines and the families at home fighting.
Mar 24th, 2020

The charges are in connection with the 2018 fire that killed 84 people and decimated three towns.
Olga R. Rodriguez
Mar 23rd, 2020

The shields are no cost to the recipients and include a 3D-printed frame and a clear plastic shield.
Unit 202 Productions
Eric Sorensen
David Mantey
Mar 23rd, 2020

Hospitals have run so short of the masks and other PPE that they've had to ration them.
Associated Press
Mar 22nd, 2020