Older People Dying On Job At Higher Rate Than All Workers

Older people are dying on the job at a higher rate than workers overall, even as the rate of workplace fatalities decreases, according to an Associated Press analysis of federal statistics.

Older people are dying on the job at a higher rate than workers overall, even as the rate of workplace fatalities decreases, according to an Associated Press analysis of federal statistics.

It's a trend that's particularly alarming as baby boomers reject the traditional retirement age of 65 and keep working. The U.S. government estimates that by 2024, older workers will account for 25 percent of the labor market.

Getting old — and the physical changes associated with it — "could potentially make a workplace injury into a much more serious injury or a potentially fatal injury," said Ken Scott, an epidemiologist with the Denver Public Health Department.

William White, 56, was one of them. White fell 25 feet while working at Testa Produce Inc. on Chicago's South Side. He later died of his injuries.

"I thought it wouldn't happen to him," his son, William White Jr., said in an interview. "Accidents happen. He just made the wrong move." 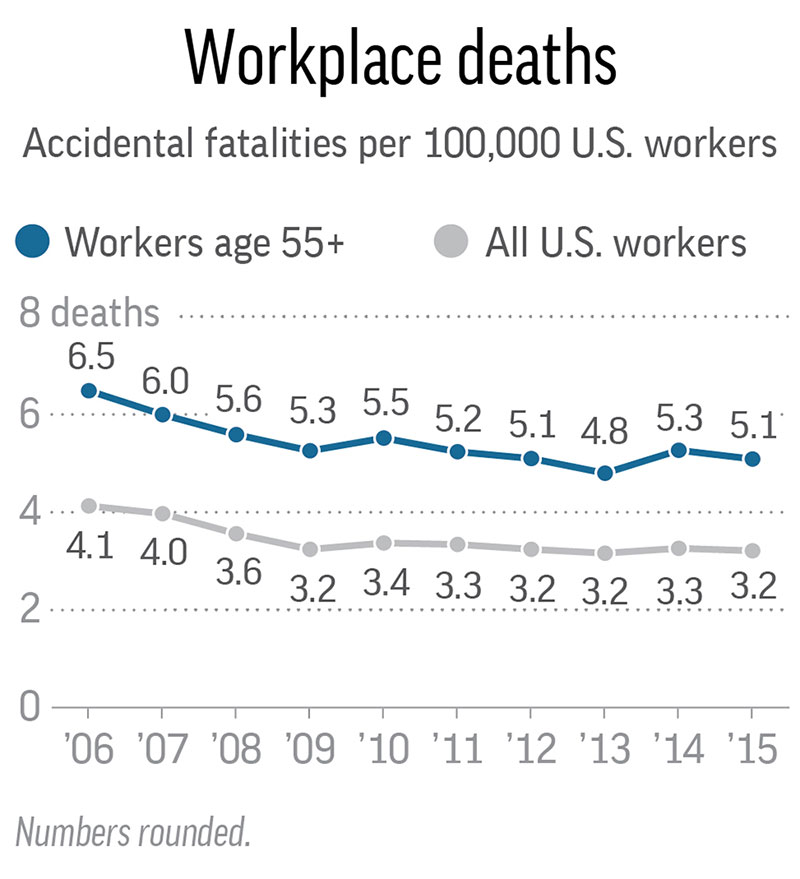 Graphic shows workplace death rates for all U.S. workers and those over 55 since 2006.

The AP analysis showed that the workplace fatality rate for all workers — and for those 55 and older — decreased by 22 percent between 2006 and 2015. But the rate of fatal accidents among older workers during that time period was 50 percent to 65 percent higher than for all workers, depending on the year.

During that time period, the number of older people in the workplace increased by 37 percent. That compares with a 6 percent rise in the population of workers overall.

Ruth Finkelstein, co-director of Columbia University's Aging Center, cautions against stereotyping. She said older people have a range of physical and mental abilities and that it's dangerous to lump all people in an age group together because it could lead to discrimination.

She said she's not sure that older workers need much more protection than younger workers, but agreed there is a need for all workers to have more protection. "We are not paying enough attention to occupational safety in this country," she said.

The AP analysis is based on data from the Bureau of Labor Statistics' Census for Fatal Occupational Injuries and from one-year estimates from the American Community Survey, which looks at the working population. It excludes cases where the cause of death was from a "natural cause," including a heart attack or stroke.

AP also examined the number and types of accidents in which older workers died between 2011, when the bureau changed the way it categorized accidents, to 2015: 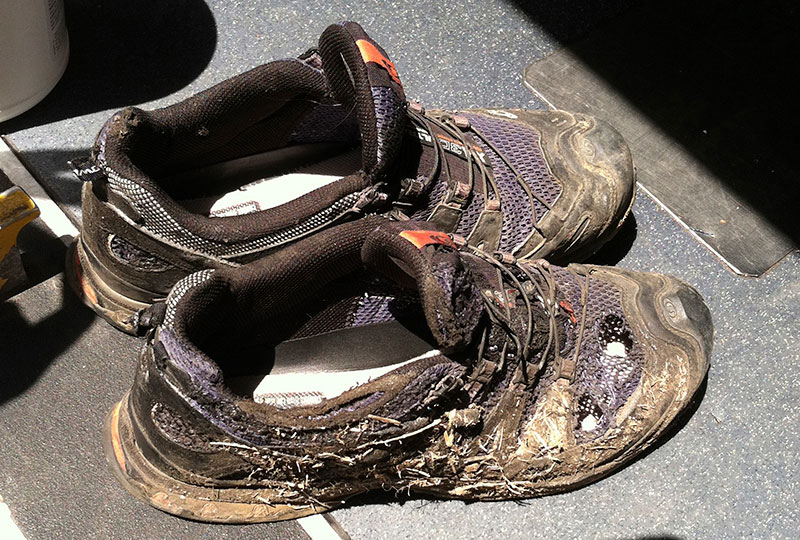 This April 29, 2014, photo provide by the Bryan, Texas, Fire Department, shows a pair of shoes belonging to one of the three workers injured after an explosion at the Bryan Texas Utilities Power Plant. The fire killed a 60-year-old worker and injured another two workers. Older people are dying on the job at a higher rate than workers overall, even as the rate of workplace fatalities decreases, according to an Associated Press analysis of federal statistics. (Bryan Fire Department via AP)

"We expect that there will be more older workers increasing each year and they will represent a greater share (of the fatalities) over the last couple of decades," said Scott, the Denver epidemiologist. "This issue of elevated risk is something we should be paying close attention to."

An Associated Press-NORC Center for Public Affairs Research poll found in 2013 that 44 percent of older Americans said their job required physical effort most or almost all of the time, and 36 percent said it was more difficult to complete the physical requirements of their jobs than it was when they were younger.

William White Jr. said his father had been working in the same Chicago-based warehouse for over a decade and was a manager when he fell to his death on Sept. 24, 2015.

"My dad was the best at what he did. He's the one who taught me everything I know," the 26-year-old Chicago resident said. "He went up to get an item for the delivery driver and the next thing you know he made a wrong move and fell. The job is fast-pace and everybody is rushing."

Thomas Stiede, principal officer for Teamsters Local 703, said White knew the safety procedures and he can't understand why White didn't wear a safety harness. "He was a very conscientious employee," he said, his voice cracking with emotion.

Testa Inc. was fined $12,600 by the U.S. Occupational Safety and Health Administration for failing to provide safety training. The company declined to comment for this story.

The same year White died, the fatal accident rate in Illinois for older workers was 4.5 per 100,000 workers, 60 percent higher than the comparable rate for all workers.

In most states, the fatal accident rates for older workers were consistently higher than comparable rates for all workers.

Nevada, New Jersey and Washington had the greatest percent increase in fatal accident rates for older workers between 2006 and 2015.

The three states with the biggest percent decrease were Hawaii, Oregon and Vermont.

Transportation accidents account for a large portion of fatal workplace incidents among both older workers and workers in general.

In one such incident, Ruan Qiang Hua, 58, died last Nov. 21 from injuries suffered in a forklift accident at Good View Roofing and Building Supply warehouse, according to the California Occupational Safety and Health Administration. After a bag of mortar fell from the pallet, Qiang backed up and rolled off a ramp. The forklift tipped over and Qian was crushed when he jumped off.

The agency fined the San Francisco-based company $62,320, saying it had failed to ensure that forklift operators were competent and wore seat belts.

The company is appealing the penalties, according to OSHA.

Records show that Hua was not properly trained or certified as a forklift operator. Video of the incident showed he was not wearing his seatbelt. Other video from the worksite showed that other forklift operators also had not used their seat belts and that the employer failed to install a curb along the sides of the ramp to prevent the lifts from running off the ramp. The company declined to comment.

The AP analysis showed that older workers were involved in about 1 in 4 fatal workplace accidents related to fires and explosions from 2011 to 2015.

In April 2014, Earle Robinson, 60, and other employees were doing maintenance work at Bryan Texas Utilities Power Plant, about 100 miles north of Houston, when there was a loud explosion. Workers called 911 and pleaded for help.

"He's in bad shape. He's got a lot of facial burns," according to a transcript of the 911 calls. "He's got some pretty bad burns."

Robinson was taken to a hospital in Houston and died days later. The company declined to comment for this story.

The year Robinson died, the fatality rate among older workers in Texas was 6.1 per 100,000 workers — 43 percent higher than the accident rate for all workers.

The National Center for Productive Aging and Work is pushing for changes in the workplace to make it safer for older workers. The year-old center is part of the National Institute for Occupational Safety and Health.

"We advocate to make workplaces as age-friendly as possible," said co-director James Grosch. For example, increased lighting helps older workers whose eyesight has weakened with age.

He said the center is emphasizing productive aging, looking at "how people can be more productive, how their wisdom can be leveraged in a workplace."