The collapse of a tunnel containing radioactive waste at the Hanford nuclear weapons complex underscored what critics have long been saying: The toxic remnants of the Cold War are being stored in haphazard and unsafe conditions, and time is running out to deal with the problem.

RICHLAND, WA — The collapse of a tunnel containing radioactive waste at the Hanford nuclear weapons complex underscored what critics have long been saying: The toxic remnants of the Cold War are being stored in haphazard and unsafe conditions, and time is running out to deal with the problem.

"Unfortunately, the crisis at Hanford is far from an isolated incident," said Kevin Kamps of the anti-nuclear group Beyond Nuclear.

For instance, at the Savannah River Site in South Carolina, which opened in the 1950s and produced plutonium and tritium, the government is laboring to clean up groundwater contamination along with 40 million gallons of radioactive liquid waste stored in tanks that are decades past their projected lifespan. The job is likely to take decades.

In addition to the tunnel collapse discovered Tuesday, dozens of underground storage tanks at the Hanford Nuclear Reservation in Washington state — some dating to World War II — are leaking highly radioactive materials.

The problem is that the U.S. government rushed to build nuclear weapons during the Cold War with little thought given to how to permanently dispose of the resulting waste.

Safely removing it now is proving enormously expensive, slow-going, extraordinarily dangerous and so complex that much of the technology required simply does not exist. The cleanup has also been plagued with political and technical setbacks.

For example, the nation's only underground nuclear waste repository, in New Mexico, closed to new shipments in 2014 after an improperly packed drum of waste ruptured. The site just recently reopened.

The U.S. Department of Energy spends about $6 billion a year on managing waste left from the production of nuclear weapons.

"The temporary solutions DOE has used for decades to contain radioactive waste at Hanford have limited lifespans," said Sen. Ron Wyden, an Oregon Democrat and frequent Hanford critic. "The longer it takes to clean up Hanford, the higher the risk will be to workers, the public and the environment."

U.S. Energy Secretary Rick Perry acknowledged the problem with nuclear waste, saying the nation can no longer delay fixing the problem because lives are at stake.

During a tour Wednesday of the Los Alamos National Laboratory in New Mexico, Perry said the federal government has failed to remove the waste in a timely manner and he pledged to make progress.

A recently approved bipartisan federal budget deal for this fiscal year includes $2.3 billion for the ongoing Hanford cleanup, which matches the amount that Sen. Patty Murray, a Washington Democrat, worked to include last year. President Donald Trump is expected to release his 2018 proposal later this month.

Washington Gov. Jay Inslee said the state plans to issue an order making sure the federal government determines the cause of the tunnel collapse. The order will also require the Energy Department to assess if there's an immediate risk of failures in any other tunnels and take actions to safely store waste in the tunnels until a decision is made about how to permanently handle the material.

Thousands of workers at Hanford were told to stay home as efforts began to plug the 400-square-foot (37-square-meter) sinkhole in the earth over the unoccupied storage tunnel.

Officials said they detected no release of radiation and no one was injured in the collapse, though thousands of workers were forced to take shelter for several hours as a precaution. The cause of the collapse was not immediately known. 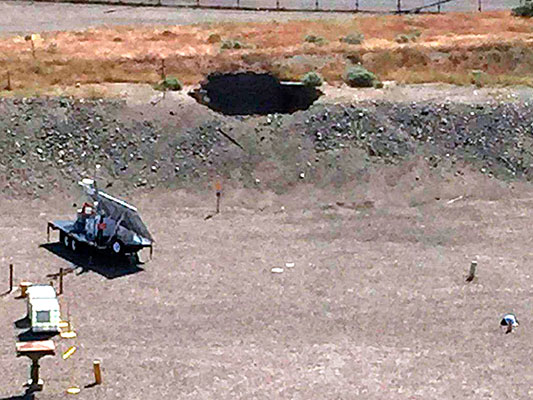 This image provided by the U.S. Department of Energy shows a 20-foot by 20-foot hole in the roof of a storage tunnel at the Hanford Nuclear Reservation near Richland, Wash., Tuesday, May 9, 2017. An emergency was declared Tuesday after the partial collapse of the tunnel that contains rail cars full of radioactive waste. (U.S. Department of Energy via AP)

A gravel road was built to the collapse site, and workers wearing protective suits and breathing masks planned to fill the hole with 50 truckloads of dirt, the Energy Department said.

The rail tunnel was built in 1956 out of timber, concrete and steel, topped by 8 feet of dirt. It was 360 feet long (110 meters). Radioactive materials were brought into the tunnel by railcars. The tunnel was sealed in 1965 with eight loaded flatbed cars inside.

Gerry Pollet, a Washington state legislator and longtime Hanford critic, said the collapse of a waste storage tunnel at Hanford had been feared for years.

"This disaster was predicted and shows the federal Energy Department's utter recklessness in seeking decades of delay for Hanford cleanup," he said.

He noted the Energy Department last year received permission to delay removing waste from the tunnels until 2042. The waste was supposed to be gone by 2024, Pollet said.

The radiation levels of the waste in the tunnel that collapsed would be lethal within an hour, Pollet said.

Hanford, a 500-square-mile (1,300-square-kilometer) expanse in remote interior Washington about 200 miles from Seattle, was created during World War II as part of the Manhattan Project to build the atomic bomb.

Hanford made most of the plutonium for the nation's nuclear weapons, including the bomb dropped on Nagasaki, Japan, during the war. It now contains the nation's greatest volume of radioactive waste left over from the production of weapons plutonium.

The cleanup there has cost $19 billion to date and is not expected to be finished until 2060, at an additional cost of $100 billion.

The most dangerous waste at Hanford is 56 million gallons stored in 177 underground tanks, some of which have leaked.

Plans to embed the toxic stew in glass logs for burial have floundered. Construction of a $17 billion glassification factory has stopped because of design and safety issues.

The plan is to bury the glass logs at a nuclear waste dump carved inside Nevada's Yucca Mountain, a project that has been on the drawing board for three decades but has run into resistance from Nevada politicians, including former U.S. Sen. Harry Reid.

President Donald Trump has proposed $120 million to restart the licensing process for the dump.