Pork prices may be on the rise in the next few months because of a new virus that has migrated to the U.S, killing piglets in 15 states so far. Dr. Nick Striegel, assistant state veterinarian for the Colorado Department of Agriculture, said the Porcine Epidemic Diarrhea Virus, also known as PED, was thought to exist only in Europe and China, but Colorado and 14 other states began reporting the virus in April. 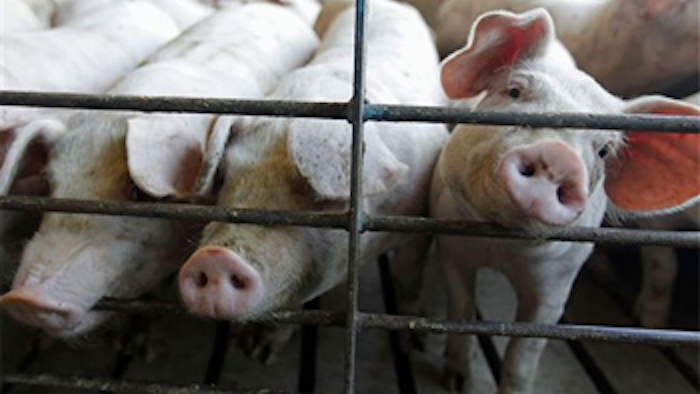 DENVER (AP) — Pork prices may be on the rise in the next few months because of a new virus that has migrated to the U.S, killing piglets in 15 states at an alarming rate in facilities where it has been reported.

Dr. Nick Striegel, assistant state veterinarian for the Colorado Department of Agriculture, said Wednesday the Porcine Epidemic Diarrhea Virus, also known as PED, was thought to exist only in Europe and China, but Colorado and 14 other states began reporting the virus in April, and officials confirmed its presence in May. The virus causes severe diarrhea, vomiting and severe dehydration in pigs, and can be fatal.

"It has been devastating for those producers where it has been diagnosed. It affects nursing pigs, and in some places, there has been 100 percent mortality," he said.

Striegel said the disease is not harmful to humans, and there is no evidence it affects pork products.

He said outbreaks are not required to be reported to federal officials, so the extent of the spread is difficult to determine, but in Colorado at least two large production facilities have seen outbreaks.

The virus has been confirmed in about 200 hog facilities in 14 other states including Arkansas, Iowa, Illinois, Indiana, Kansas, Michigan, Minnesota, Missouri, North Carolina, New York, Ohio, Oklahoma, Pennsylvania, and South Dakota, according to the American Association of Swine Veterinarians.

Dr. Lisa Becton, director of swine health information and research for the National Pork Board, an industry trade group, said the impact on the availability of pork and meat prices is difficult to estimate.

"At this point, I really don't have any indications what that potential impact would be. Obviously, we know for individual farms the impact is severe, especially if it's a sow farm that has baby pigs, because baby pigs do suffer the most from the disease," she said.

According to the Iowa Pork Industry Center, an industry advocate, the ability to test for the disease is limited. It is believed to be transmitted by infected food or feces, and can be contained by quarantining infected animals and washing down trucks and production facilities.

Becton said the disease can spread quickly and has killed entire populations of pigs under 7 days old.

"As they get older, by the time they're weaned at around 3 weeks of age, death loss can be around 80 percent or in severe cases upwards of 100 percent. Typically, after weaning mortality declines dramatically," she said.

She said veterinarians are still not sure how the disease got to the U.S.

Phil Lukens, co-owner of Lukens Farms located about 100 miles north of Denver where about 20 pigs a year are raised for market, said he has not been warned about the new disease, but he said most farmers already take stringent precautions to protect their pigs.

"There are so many viruses, you always assume the worst. We keep our place clean, and we quarantine new animals for 30 days," Lukens said.