109 US Salmonella Cases Now Linked To Papayas From Mexico

An increasing number of people have been sickened by eating papaya now traced to a farm located in southern Mexico, U.S. public health officials said Monday in an update on the outbreak first reported more than two weeks ago. 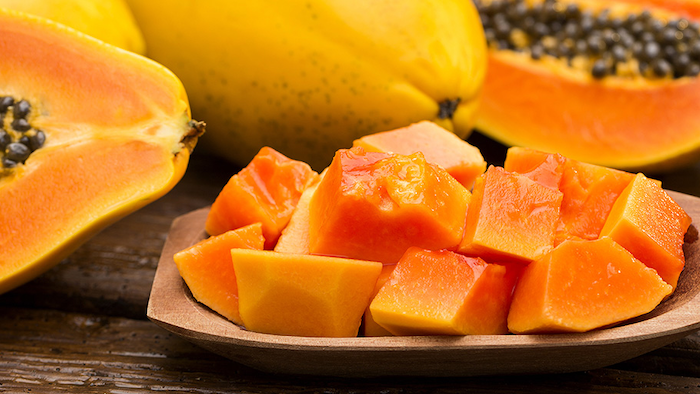 DES MOINES, Iowa (AP) — An increasing number of people have been sickened by eating papaya now traced to a farm located in southern Mexico, U.S. public health officials said in an update on the outbreak first reported more than two weeks ago.

Salmonella has now sickened 109 people in 16 states and 35 were serious enough to be hospitalized, the U.S. Centers for Disease Control and Prevention said on its web page dedicated to the outbreak. One person in New York City died.

Papaya traced to the Carica de Campeche farm in Campeche, Mexico, appears to be the likely source, the FDA said Monday. The farm is located on the Gulf of Mexico side of the Yucatan Peninsula.

The company did not immediately respond to an email and phones went unanswered on Tuesday. A storm warning was posted for the area as Tropical Storm Franklin was making its way across the Yucatan Peninsula.

Papayas from the Carica de Campeche farm tested positive for five different strains of salmonella bacteria, which can cause diarrhea, vomiting, stomach pain and fever. Young children, older adults and people with weakened immune systems are the most likely to have severe infections.

Cases in New York nearly tripled to 36 since the last report on July 21 and New Jersey cases have more than doubled to 26. Virginia has had 11 cases, Pennsylvania seven and Maryland has had six.

Connecticut and Minnesota each have four cases, and Massachusetts has had three.

Iowa, Kentucky, North Carolina and Oklahoma have reported two cases and Delaware, Louisiana Michigan and Wisconsin have had one each.

The FDA said it is working with Mexican food safety authorities to conduct inspections and other follow up activities.

The Campeche farm has been added to an import alert which allows FDA field personnel to stop fresh produce from entering the U.S. from the farm until it's proven to have resolved issues that caused the bacterial contamination. It was not immediately clear how the papaya was contaminated, an FDA spokesman said.

"The investigation is continuing and we'll post more information when it's available," said Peter Cassell.

The CDC said laboratory evidence using genetic testing has connected some of the illnesses to papaya from the farm.

So far the Caribena, Cavi and Valery brands of maradol papayas have been recalled but the CDC now recommends that consumers not eat, restaurants not serve, and retailers not sell maradol papayas from Mexico.