According to court officials, attorneys for Eastman Chemical and Charleston-area residents and businesses proposed the settlement. 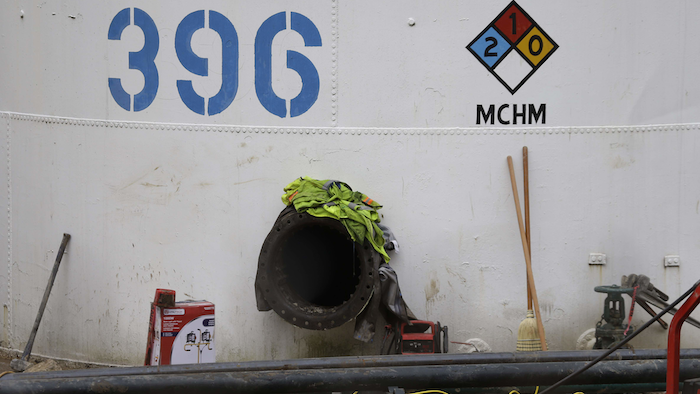 MORGANTOWN, W.Va. (AP) — A proposed settlement has been reached between Charleston residents and a chemical company accused of not doing enough to safeguard West Virginia's capital city from a spill that polluted the drinking water of thousands of people in 2014.

According to court officials, attorneys for Eastman Chemical and Charleston-area residents and businesses proposed the settlement. Eastman is producer of a coal-cleaning agent that spilled.

It is subject to approval by U.S. District Judge John Copenhaver. Its terms are sealed. The settlement would apply in the class-action suit to about 225,000 people and more than 7,000 businesses whose tap water was contaminated and who were advised for days not to use it.

Eastman Chemical did not reply to requests for comment Wednesday.

Anthony Majestro, an attorney for the plaintiffs, said it would apply to all state and federal court claims and will be unsealed after trial or settlement of class-action claims against West Virginia American Water. Those settlement talks were continuing Wednesday, he said.

Copenhaver postponed the trial against the water company to Friday. It had been set to begin Thursday.

The chemical leaked from a storage tank of Freedom Industries into the Elk River in January 2014, about 1.5 miles upstream from the water system's intake, preventing the capital and nearby areas from using tap water for days. Businesses temporarily shut, hundreds went to emergency rooms complaining of nausea and rashes, and authorities later adopted more stringent inspections of aboveground storage tanks. Days after the spill, Freedom filed for bankruptcy.

Copenhaver certified the class-action suit a year ago for the plaintiffs, saying they were mostly residents whose water supply was interrupted, employees who lost wages during business closures and others impacted in varying ways by the disaster.

The suit alleged the water company was unprepared for the spill and that Eastman Chemical didn't advise Freedom of the dangers of the coal-cleaning agent.

Laura Martin, a spokeswoman for West Virginia American Water, said the water company only began lifting a do-not-use order on tap water between four and nine days after the spill once tests showed the chemical had flushed from the water supply. The company's multiple systems provide water to about 560,000 people in West Virginia. The system for greater Charleston was the only one affected. She said the claims against the company are "without merit."

Eastman produced the coal-cleaning chemical that leaked from the Freedom Industries tank. The suit claims the company didn't test the corrosive chemical MCHM properly or warn about possible effects on human health or tanks used to store it.

In court filings, Eastman said it wasn't negligent, didn't violate environmental laws and complied with federal guidelines for testing the chemical it sold to Freedom Industries.

In late September, the U.S. Chemical Safety Board released a draft report on the spill, saying it found no documentation of inspections by Freedom Industries that would have identified corrosion in its leaky aboveground tank. It also said Freedom lacked leak detection or prevention systems.

In February, Former Freedom Industries officials Gary Southern and Dennis Farrell were sentenced to a month in federal prison on pollution charges. Four others received probation.

On Monday Copenhaver ordered a separate trial for claims against them.