How Multiscan Technology Will Revolutionize Metal Detection And Food Safety

Multiscan technology is poised to revolutionize metal detection and food safety, eliminating the need for manufacturers to compromise, and reducing their risk of costly recalls. 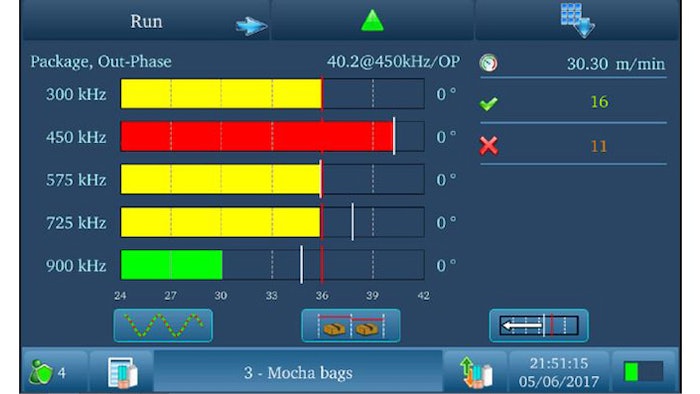 Multiscan utilizes five frequencies to find various types of metal in products. In this case, it shows 450 khz working well but also three other frequencies getting close to detection.

In the food manufacturing industry, the words “inconsistent,” “unpredictable” and “compromise” are too often associated with conventional metal detection. For more than 25 years, the most technologically proficient instruments for metal detection have enabled manufacturers to minimize the chances of foreign metal objects escaping their facility and reaching the consumer, but the technology has always had its limitations. Achieving 100 percent detection has been elusive.

The primary reason for such limitations is that these instruments traditionally use only one or two frequencies to detect any type, size or shape of metal inside either dry or wet products. This has always been a compromise, because there is no singular, ideal frequency to detect everything, anywhere, in any product. As a result, sensitivity is impacted and escapes can be an unpleasant and costly reality for manufacturers.

The latest technological breakthrough, however, has allowed manufacturers to find metal types and sizes previously undetectable, bringing more predictability to the process. This innovation — multiscan technology — is poised to revolutionize metal detection and food safety, eliminating the need for manufacturers to compromise, and reducing their risk of costly recalls.

Why the Inconsistencies in Detection?

Why does a coin or piece of jewelry set off a metal detector as you enter the airport terminal for your inbound flight but not when you do the same for your outbound flight? This type of unpredictable detection performance is similar to detection in food and consumer goods. Quite simply, metal detection does not always work.

One key barrier in food manufacturing is that metal detectors use electromagnetic fields to find magnetic and conductive material. Most food products are wet, have salt or contain minerals, and look magnetic and conductive when subjected to electromagnetic fields. Ignoring the product and finding the metal is not as easy as it seems, especially in a facility with high daily production volume.

Another barrier is the amount and variety of potential noise sources in a facility that can confuse a metal detector’s electronics and software — large motors are turning on and off, electronics boxes are broadcasting wide spectrums of radiated noise and production equipment is vibrating and causing the antenna in the metal detector to move ever so slightly. Small metal foreign objects have very small signals that can be lost amid the noise.

Different metals are more or less detectable at different frequencies. Running two frequencies (one low and one high on a dual-frequency detector), as opposed to just one, may not necessarily overcome the challenges of metal detection, because different metal alloys have different reactions, plus their size, shape, orientation and position can change the resulting signals in the detector.

The newest approach to metal detection in the food manufacturing industry revolves around heightened sensitivity, which is designed to greatly decrease the probability of an escape when compared with conventional single- or dual-frequency metal detectors. With a multiscan detector, operators in a plant are capable of scanning through up to five frequencies at once, in essence the equivalent of running five metal detectors.

During a recent comparison in testing between a single-frequency metal detector and a multiscan metal detector, the following improvements were realized:

Why such a dramatic rate of improvement with a broad spectrum approach to metal detection? A critical factor is overcoming product phasing. The phase angle of a product is the ratio of its magnetic signal and conductive signal — various metals have different amounts of each signal. A foreign metal object can go undetected if its phase angle exactly matches up with the product phase angle. Varying the frequency slightly could solve the problem, but could mean missing a different type and size metal object. In other words, the problem isn’t truly solved — it has merely moved elsewhere.

As an example, if looking for a stainless steel sphere that is 2.25 millimeters in diameter hidden in a slice of cheese, an operator could vary the frequency, separating the product and metal phase angles, and detect the stainless steel, but that could mean that the operator will not see a different size of stainless steel because this contaminant phase angle lines up exactly with the cheese. This is a subtle yet significant concern in single- and even dual-frequency detectors. When scanning five frequencies at once, however, if a foreign metal object is phased out at one frequency, another frequency detects it, and vice versa. Further, multiscan detectors are designed with flexibility, allowing manufacturers to adjust or disable frequencies to optimize performance.

Contamination threats — chemical, biological and physical — exist at every step of the food chain. Consumers rely on stakeholders at every step to keep their food safe and free of contaminants, and food manufacturers play a large role.

The cost of failure can be significant. A piece of metal escaping a facility can have financial repercussions, can cause damage to a brand or a company’s reputation and, most importantly, can impact consumer health and safety. Traditionally, manufacturers employing metal detectors have had to compromise, but the technology has evolved. They now have advanced instrumentation at their disposal that virtually ensures that no foreign metal objects will escape their facility.

Between global food safety standards, industry codes of practice, retailer demands and consumer expectations, the time is now for food manufacturers to embrace technology that was unavailable a decade ago, but is now here to stay.