As technology becomes smaller and more automated it opens more options for analytical testing for food processors. Smaller molecular qPCR test systems are now available that can save you time, storage and inventory costs, and help to assure food safety and detect food fraud. 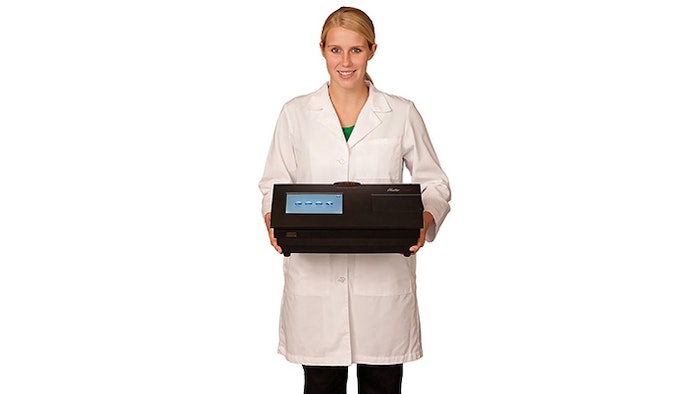 According to additional data from SCI, approximately 50 percent of those tests are conducted at in-house laboratories run by the food processors, while the other 50 percent are sent out to food contract laboratories. Only one-third of the processor locations, however, are responsible for 50 percent of all samples, and these locations are typically the very large corporate processors with high sample volumes (and why that small percentage of locations is responsible for the large volume of the total).

These large processors have the advantage of having large facilities and greater resources, allowing them to efficiently run their own in-house laboratories. For those of these larger processors that send their samples out to food contract labs, they also have the business volume to get advantageous pricing terms from labs, which keeps their outsourcing costs low.

But where does that leave the smaller or medium-sized processor?

Smaller processors do not have the business volume to get advantageous pricing from food contract labs, and pathogen testing can cost $25-per-sample or more, not including sampling and shipping costs.  In the past, small and medium-sized processors also did not have the sample volume demand to justify the large capital costs associated with to setting up their own in-house laboratories using traditional food pathogen diagnostic equipment. The capital cost, for example, for a single diagnostic instrument — using one of the leading diagnostic platforms for food pathogens such as molecular genetic testing (qPCR or quantitative Polymerase Chain Reaction) or immunoassay (antibody-based technology) — can be as much as $100,000, not including the cost of renovating a space suitable for use as a laboratory. The payback time for a processor that needed analysis of fewer than perhaps 25 samples per day was simply too long for most companies to justify.

This left small and medium-sized processors with no option but to send their samples out to an outside lab.  As mentioned, this can be expensive — not only because of the sample fees charged by the lab — but it is also time-consuming to ship the samples to the lab. Often, the processor will not get the results back for four-to-six days, adding product storage and inventory costs in a typical finished product hold-and-release program. In some areas of the country where there are no nearby commercial food labs — and some estimate that there may be as many as six-to-10 U.S. states that have no suitable, accredited commercial food safety lab — the delays can be longer, adding to those storage costs.

Recent breakthrough advances in molecular technology have enabled sensitive qPCR diagnostic instruments to get much smaller and much less expensive. Instruments are now on the market that have capital costs in the neighborhood of $10,000, and are approximately the size of a shoe box. These instruments are easy to operate and typically use a small sample “cartridge” where the sample is enclosed and gets plugged into the system much like a memory card might be plugged into a cell phone.  Once the sample cartridge has been prepared and entered into the instrument, the sample analysis process is fully automatic and the results of the sample analysis are available within approximately two hours.  This puts having an effective and cost-saving in-house food lab within the reach of most small and medium-sized food processors.

Typical of the companies looking to take advantage of these new developments was a seafood processor that operates a remote canning facility in Alaska.

Food safety has always been a priority for this company and it has always maintained a rigorous food safety and testing program. Being located in a remote area in Alaska, however, and without access to a nearby commercial laboratory meant the seafood processor had to send its samples to a lab in the lower 48 states. Shipping samples to a distant commercial lab can add delays to a sample program under normal circumstances, but the inconsistent availability of shipping services due to the difficult weather that can be a regular part of Alaskan life meant the company was often getting its sample results back in seven days or longer after sampling. These delays were affecting the seafood processor’s ability to make decisions and efficiently run its operations.

The company decided to evaluate its options for bringing sample analysis in-house. It needed a system that was accurate with a high level of specificity for Salmonella and Listeria (including L. monocytogenes) for both product testing and environmental monitoring. The seafood processor elected to test one of these new, smaller qPCR systems and began a trial of the technology in a validation study run side-by-side with its existing testing. After running this trial on more than 50 representative samples, the company found complete agreement between the sample data generated in its new in-house lab and the data it received from the commercial lab. This enabled the seafood processor to establish its in-house testing program and reduce sample turnaround times, which resulted in a reduction in storage and inventory costs, as well as a reduction in overall food safety program costs.

There is another hidden benefit in using qPCR testing that is often overlooked. PCR testing involves analysis of the DNA present in a sample. In the case of testing for pathogens, the DNA of the target bacteria in the sample is interrogated with small complementary pieces of synthetic DNA which only bind and give a signal if an exact match is found in which case you have a positive sample.

This same technology can be used to test for, and help combat, a common type of food fraud.

Food fraud can take many forms, including mislabeling (e.g., claiming something is “organic” when it is not) or counterfeit branding.  But it is unfortunately becoming far too common — especially in the protein segment — to see product substitutions where a cheaper species of meat or fish is passed off as a more expensive one, or product adulterations, where something, typically a cheaper ingredient, is mixed into the food (e.g., horsemeat mixed into beef) to lower the cost and increase its volume.

Genetic test technologies like qPCR analyze the DNA contained in a sample to quickly determine if a product has been wholly substituted or adulterated with another meat or seafood.

Legally, only one type of fish (the Ictalurus genus) can be called “Catfish” in the United States. It is known, however, that Asian importers have been marketing other types of fish as U.S.-farmed catfish.  These imported imposters are typically poor quality fish, farmed in overcrowded unsanitary conditions and sold at lower prices to undercut the sales of authentic U.S. catfish.

To ensure its credibility and brand reputation, a seafood distributor sourcing catfish and other species from numerous global suppliers was looking for a way to be sure that the fish it was sourcing were authentic. The seafood distributor had been sending product samples by courier to a testing company in a Midwestern U.S. state, but this process was both expensive and time-consuming. But because the company was sourcing products from many locations throughout Asia, another fixed lab location was not the answer. A portable qPCR system that allowed species testing at the point of sale, wherever that happened to be, and returned the results in less than two hours allowed the seafood distributor to test the fish it was buying and assure they were authentic.

As technology becomes smaller and more automated it opens more options for analytical testing for food processors. Smaller molecular qPCR test systems are now available that can save you time, storage and inventory costs, and help to assure food safety and detect food fraud. This can be a significant option, especially for small and medium-sized processors.