Made in China? Iceland's Sweater-Knitters are Unhappy

Trouble is rattling one of Iceland's most distinctive industries: the production of the thick, hand-knitted "lopi" sweaters adored by tourists and worn with pride by locals. 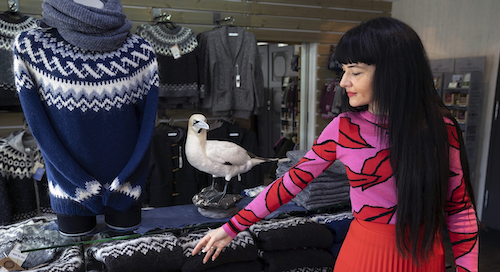 In this photo taken on Friday, 3 May, 2019, sales assistant Nuria Medina Marin gestures to a 'lopi' sweater in the Nordic store in Reykjavik. Image credit: AP Photo/Egill Bjarnason

Trouble is rattling one of Iceland's most distinctive industries: the production of the thick, hand-knitted "lopi" sweaters adored by tourists and worn with pride by locals.

The individually produced, very warm sweaters have become a symbol of Iceland. But local knitters are upset at seeing their profit margins diminished by the appearance of sweaters actually made in China, albeit from authentic Icelandic wool.

The practice was started by some local manufacturers who have successfully outsourced the labor to China. Containers full of local yarn are shipped from the North Atlantic island nation, made into sweaters, then shipped back again, labeled as "hand-knitted from Icelandic wool".

Knitting co-ops around Iceland, struggling to compete, last month urged the government to ban companies from branding woolen sweaters as "Icelandic" unless they are made locally.

"People buy the imported sweaters as the real thing," said Thuridur Einarsdottir, founder of the Handknitting Association of Iceland. "But it is not."

The "lopi" yarn comes from Iceland's 500,000 sheep, which have a fleece adapted to a rugged landscape with widely fluctuating temperatures.

The thick sweaters are impossible to make by machine. One adult-size sweater takes between 14 and 25 hours to knit, depending on the numbers of colors used and extra features like zippers and buttons.

Icelandic women have traditionally subsidized household income with the work, and today many sweeten their retirement years with the extra cash.

With Chinese imports grabbing an estimated two-thirds market share — particularly among tourists — knitting co-ops around the country worry about the future.

"The trade thrives on tourists because most locals already own a sweater and they are very durable," said Einarsdottir, who founded the Handknitting Association in the 1970s to increase women's bargaining power against retailers.

The quality of each garment ultimately comes down to the skill of the individual knitter, raising the question of what actually makes the sweater "Icelandic."

"What if the sweater is made by a Polish resident in Iceland?" asked Bjarni Jonsson, owner of Nordic Store, a company that makes roughly 20,000 sweaters a year in China for its local retail business in Iceland. "When does the sweater start — or stop — being Icelandic?"

To domestically produce the number of sweaters it produces in China, Nordic Store estimates it would need 200 to 250 people working full-time, in a country of 350,000 people.

"We don't have that many knitters," Jonsson said.

Locally made sweaters retail for about $200, while the Chinese ones sell for around $170, reflecting the wage gap between the two nations.

Chinese knitters are, according to Nordic Store, paid $3 to $5 per hour, depending on their skill and experience. The number could not be verified and the company declined to identify the location of its operation, beyond that it is in southern China.

In Iceland, competitive pressures have pushed the knitting rate far below the hourly $14.50 minimum wage. Knitters, who are self-employed and often retired, claim the practice is a lifestyle as much as labor.

"It gives me something to do while watching television or drinking coffee with friends," said Heiddis Gunnarsdottir, a local knitter. The repetitive practice is taxing on the body, however, often leading sore wrists and shoulders.

Gunnarsdottir is about to complete a green sweater with a rainbow-colored pattern surrounding the neck opening; the circular yoke is the defining feature of the "lopi" sweaters.

Contrary to popular belief, the sweater is not a tradition, but entirely modern.

"No one really know where it comes from," said Vedis Jonsdottir, a clothing designer who writes and edits "Lopi", a best-selling magazine with wool sweater knitting recipes.

The method spread around knitting groups in the 1960s after the arrival of the circular needle made the defining pattern possible. The design was most likely inspired — or plagiarized — from neighboring Greenland where the female national dress has a beaded collar similar to the "lopi" yoke pattern.

"It is amazing how quickly it began to resemble national pride and unity," said Jonsdottir. "To us, the sweater is like a flag." 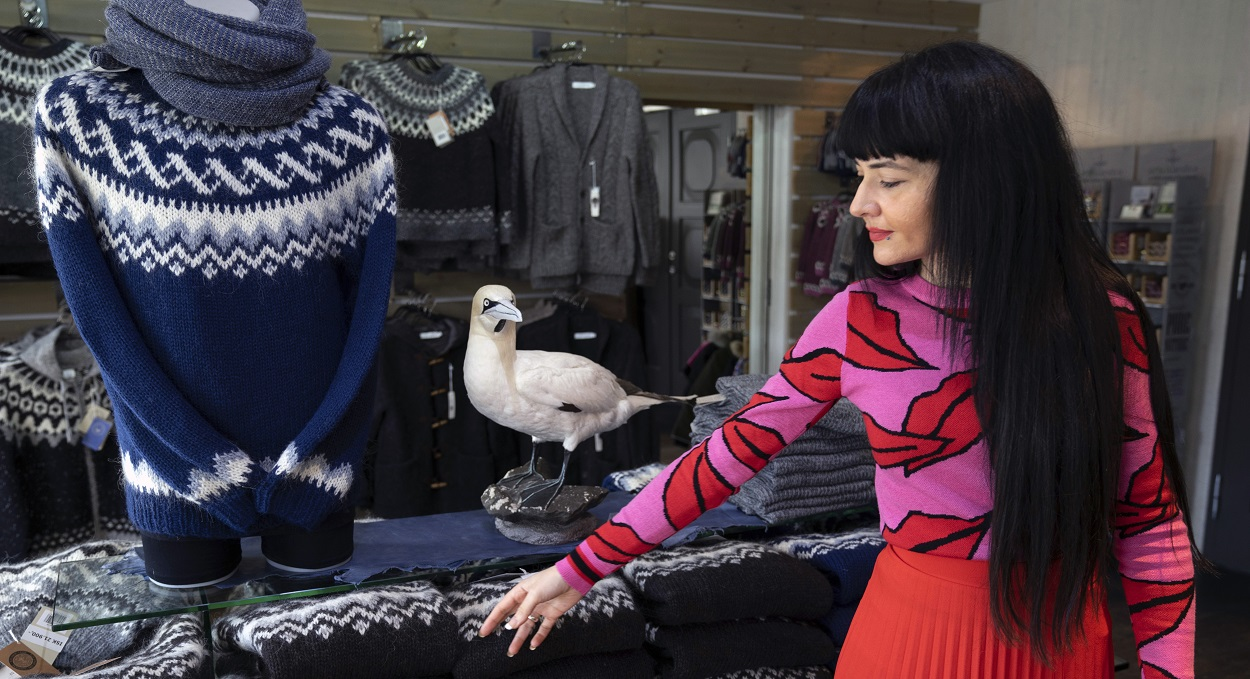 In this photo taken on Friday, 3 May, 2019, sales assistant Nuria Medina Marin gestures to a 'lopi' sweater in the Nordic store in Reykjavik. Image credit: AP Photo/Egill Bjarnason
Latest in Operations