Mark Rosekind, the U.S. government's new auto safety chief, knew all along that the agency he was taking over lacked resources and staff to do its job properly. But after a week on the job, Rosekind says he discovered the shortages are much worse than he thought. 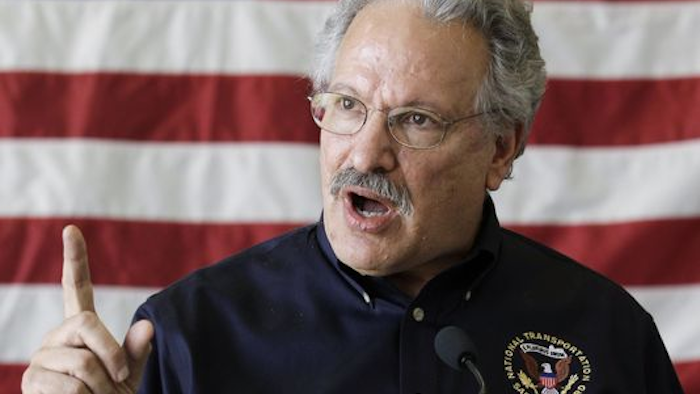 DETROIT (AP) — Mark Rosekind, the U.S. government's new auto safety chief, knew all along that the agency he was taking over lacked resources and staff to do its job properly.

But after a week on the job, Rosekind says he discovered the shortages are much worse than he thought.

Rosekind, 59, who leads the beleaguered National Highway Traffic Safety Administration, said Monday that solutions include more people and money, as well as better processes and innovation.

A human fatigue expert and former member of the National Transportation Safety Board, Rosekind spoke with reporters at the Detroit auto show. He says the agency got 75,000 safety complaints from the public last year, up from 45,000 in 2013. Yet it has just nine people to review the complaints and only 16 people to investigate when a problem is discovered.

Here are his answers to three questions, edited for length and clarity:

Q: NHTSA didn't act on General Motors' defective ignition switches or exploding Takata air bags until after people were killed. What will you do to make sure that doesn't happen again?

A: We're looking at taking action in three areas: People, technology and our authority to deal with this. We're already looking at the budget for 2016. We're trying to make sure the Office of Defects Investigations has other things there. I don't want to get into it, but our staff has proposed two new divisions and more money for a whole bunch of people, all focused on how to make sure we're better at doing that job. The agency also supports raising the maximum fine for automakers that hide safety problems from $35 million to $300 million.

Q: Fiat Chrysler CEO Sergio Marchionne says automakers have over-reacted with a record recall of more than 60 million vehicles this year. Do you think the agency has gone too far and forced automakers into unnecessary recalls?

A: We'd rather have people on the proactive end catching stuff really early than waiting too long. I think we should expect to see more recalls coming. I'd rather have quick action than waiting and finding out you made a mistake, because you cannot save those lives after they are gone. We'll watch to make sure we don't go too far, and we want to strike a balance.

Q: Is there a fine or court action coming against air bag maker Takata Corp. of Japan for refusing a nationwide recall of driver's side air bags?

A: Five automakers have agreed to do the nationwide recall. It's an open investigation. We're going to use every tool possible for us to go after it. If we find something that deserves an appropriate penalty you can absolutely count on that coming forward. That's data we just don't have yet to be able to act on. I'm actually trying to figure out other tools that might be available to us (other than court action). I'm mostly concerned about the safety. The longer it takes to fix the harder it is.