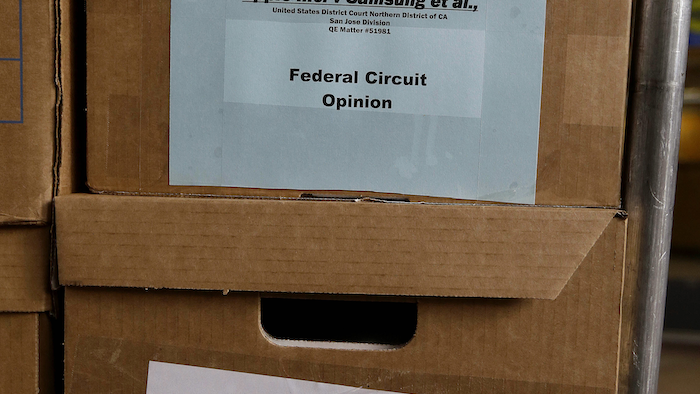 Each company accuses the other of stealing key features to develop some of the latest smartphones on the market, but Samsung's newest device, the Galaxy S5 released earlier this month, is not at issue.

The four men and four women on the jury are to determine which company is right and how much is owed in damages. Apple Inc. is demanding $2.2 billion after arguing that nine of Samsung's smartphones and one of its Galaxy tablets infringes five patents. Samsung Electronics Co. seeks a fraction of that figure, some $6 million, saying Apple infringed two of its patents in creating the iPhone.

Samsung also argues that if it is found to have infringed Apple's patent, it owes only $38.4 million.

Testimony wrapped up Monday with the recall of two expert witnesses to the stand to argue the effects of an appeals court ruling in an unrelated legal dispute between Apple and Motorola. The appeals court ruling upheld a trial judge's definition of an Apple "quick link" patent that automatically turns phone numbers and email addresses into links, enabling users to make calls and send messages with a single click.

Apple's expert, Carnegie Mellon professor Todd Mowry, argued the definition adopted by the appeals court made little difference in the case and that he believes Samsung still infringed Apple's patent for the "quick link" patent. Kevin Jeffay, a professor of computer science at the University of North Carolina and Samsung's expert, argued the opposite, saying the definition adopted by the appeals court supports Samsung's position that it didn't infringe Apple's patent.

In the end, U.S. District Judge Lucy Koh said the matter was best left for the jury to decide along with infringement questions of the other four patents. Jurors were read 53 pages of instructions Monday directing them how to decide whether an infringement occurred and how to calculate damages if fault is found.

Samsung and Apple have been locked in a worldwide struggle for dominance of the $330 billion annual market for smartphones. Samsung has captured about 31 percent of the market while Apple retains a 15 percent share.

Apple contends that many of the key functions and vital features of Samsung phones important to consumerswere invented by Apple. Samsung argues that its phones operate on the Google Android software system and that any legal complaint Apple has is with the search giant.

Google Inc. is not a party to the litigation. Google spokesman Matt Kallman declined to comment.

A different jury in San Jose presiding over an earlier trial regarding older technology ordered Samsung to pay Apple $930 million. Samsung has appealed that ruling.

Toyota Moving U.S. Base To Texas